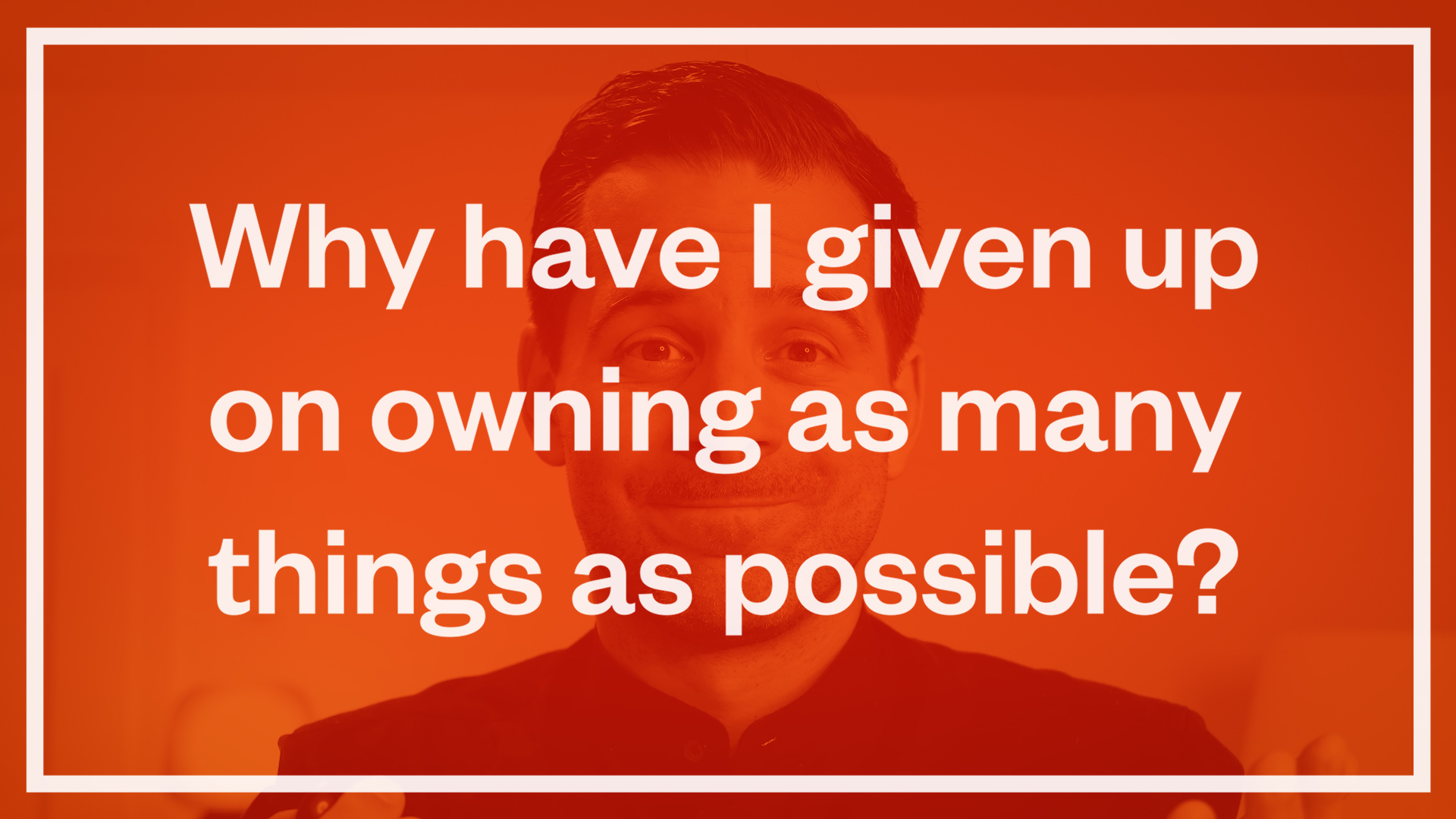 One of the questions I’m asked most often is: Why did I give up on owning as many things as possible? Here’s why and how it happened.

Hey, today I want to answer a question that I often get asked. It’s more about my personal life, but it has some implications for my professional life as well. The question is, why have I given up on owning as many things as possible. For a few years, I was homeless, I’ve traveled with just a backpack, full of stuff. At the time when I gave up on having a home, it was 64 black things. And now my personal items are down to somewhere just under 50 items. So why is that? Why did I decide to lift that weight? There have been a few turning points in my life or inflection points that led to that decision. But even before those moments, I think at a very young age, I already didn’t like owning or buying stuff much. There is one of my earliest childhood memories were my parents decided to throw out a sideboard from the living room area and replace it with a new one. And I think I cried for days; I couldn’t understand why you will give something away that was still perfectly fine and worked for all purposes intended.

Moving from place to place and across continents

But fast forward to when I was about 21. At that point, I first moved away to New York to work in a company called A Small World one of the very early social networks. Then after that, I moved to Hong Kong, the year after I moved back to Zurich, then New York, and then London. So I had already been moving from place to place and across continents a few times, and just naturally, you realize how few things you need when you are just traveling with one or two backpacks. However, once I was in London, this was the only time I worked in a corporate environment.

I started my first company

It’s been roughly 10 years since I first started my first company, and I have been continuously involved and immersed in a startup world, and to some degree, lifestyle, I think it’s hard to separate life and work when you’re when you work in startups. So I got into this corporate environment. So I thought it would be interesting to see if maybe I was even happier on the other end of the spectrum. And I took the job. And basically, on the first day, I realized that I was not going to be happy in that environment. And part of that was not the people around me weren’t intelligent or weren’t super driven or weren’t smart. They all put in all the time, energy, and hours to be successful at their job. So that was very similar to the startup world. But what I sensed was that there were a lot fewer missionaries, and most of them were just mercenaries, meaning some extrinsic motivation drove them.
In most cases, it was bonuses and money. They wanted to accumulate resources to, later on in life, be able to do what they love doing. And I thought that was an interesting concept, especially as I saw how some of them were kind of caught in that loop for years and years and spent very little time with their family and sometimes seem to be frustrated even coming into the office early in the morning.

What makes me happy?

What that triggered in me was to ask myself, what is it that makes me happy? What brings me joy, not just momentarily, but what is the thing that’s going to allow me to get up happy in the morning and also go back happy to bed, even if it was a long, stressful day full of challenges. And so what I took away is I started observing myself for about four to six months, I constantly took notes whenever I felt joy or when I felt happy. And one thing I realized was that, for me, it was really learning. Learning about how the world works, and especially learning about how to bring people together around an idea and supply them with tools and processes that allow them to grow the idea into something that becomes sustainable. In other words, how to build a startup. And once I realized that it was fascinating because it made so many things in my life that previously seemed also important. A lot less important or unimportant, even.

Exposing myself to as many learning opportunities as possible

I suddenly knew; I for at least for this phase in my life, I didn’t need to have a fancy car, I didn’t need to have a nice home, I didn’t need to have expensive clothes or be able to express myself through clothing. Because I realized that the one thing that I want to optimize for is exposing myself to as many learning opportunities as possible, and that’s what I did. I started Tenderloin Ventures, and I invested in companies both in the US, in Germany, as well as in Switzerland. With that came more travel because now that I was invested in these different companies and these diverse ecosystems, I wanted to go and work with the founders from time to time. And so one question that I’ve asked myself as I was traveling more and more was, how much stuff to actually own?

It was an interesting question for me because even though I have moved from continent to continent and I, at that point, pretty soon I was traveling almost 300 days out of the year, but I still had a home near Zurich here in Switzerland. It was interesting to me because I did not have a good answer to that question, how much stuff do I own? I couldn’t even tell if it was 200 things or 1000 or 2000 things. And so what I did as a trained engineer is, I went home, and I started a spreadsheet, and I started indexing everything that I owned, how many T-shirtss, what brand, would make and so on. And what I realized were two things. Number one, I at the time, I owned about 650 things, which was already not too much compared to… I think I’ve read a study somewhere that says, the average European adult owns about 10,000 things. So it was already far below that. But then the other thing that I realized was that it took me about three months to complete that list. That was mind-boggling to me because I owned quite a lot of stuff, way more than I could pack into my two suitcases at the time. But also it took me so long. There’s so much stuff that I had just accumulated over time but hadn’t really constantly registered anymore.

And then third, what was interesting, of course, was the question of how small can that number get, and I can still live a full, fulfilling life. So I started consolidating things: I started to ask myself, okay, if I can only own one type of T-shirt, which T-shirt will I keep one type or one pair of shoes, which pair of shoes, and so on and so forth. So I got down to about 130 items while still having a home near Zurich.

And then a third turning point that had an impact on me going homeless was when I once came back from a trip to New York, came back to Zurich. And the next morning, I got up to go back to the airport to fly to Amsterdam. And that morning, it kind of dawned on me, I asked myself, why do I even have a home? If I’m being honest, I probably just took that detour and went through Zurich, because I felt if I already pay for a flat and I have all this stuff here, I might as well use it a few nights per month. And that morning, it just dawned on me I and I said this does not make any sense.

And so that morning, like many other experiments in my life, I decided to just announce something on social media and see where this is going to lead me. And I said, “Hey, from now on, I’m going to be homeless, I’m going to be very happy if some of you share your guestroom or your couch with me if I end up being stranded in your city.” And I texted my landlord and said, I was going to give up the flat. And that’s how it happened. I became homeless, and I’ve lived without a constant home for about three years. I was super happy during that time, I was traveling a lot kind of the opposite of what’s happening during COVID right now, but I was definitely very happy. And I would miss that time, even though it was tiring at some time, sometimes to be jet-lagged almost constantly and spend so much time in airports and security ligns. It still was worth it because I got to meet so many great founders, teams, projects.

And most importantly, I got to really dig deep and go all-in on my passion, which was learning about processes and systems that help bring people together around an idea and help them build the idea into something sustainable.

All right, I hope that answered the question for why I went homeless and why I’ve reduced my personal belongs to as little as possible, and with that, stay curious, and I’ll talk to you soon.

What companies have we invested in in the past?
A Minimalist’s approach to investing

What Is ‘Proof Of Stake’ And Why Is It Important?

[Interview] A Company Without An Office