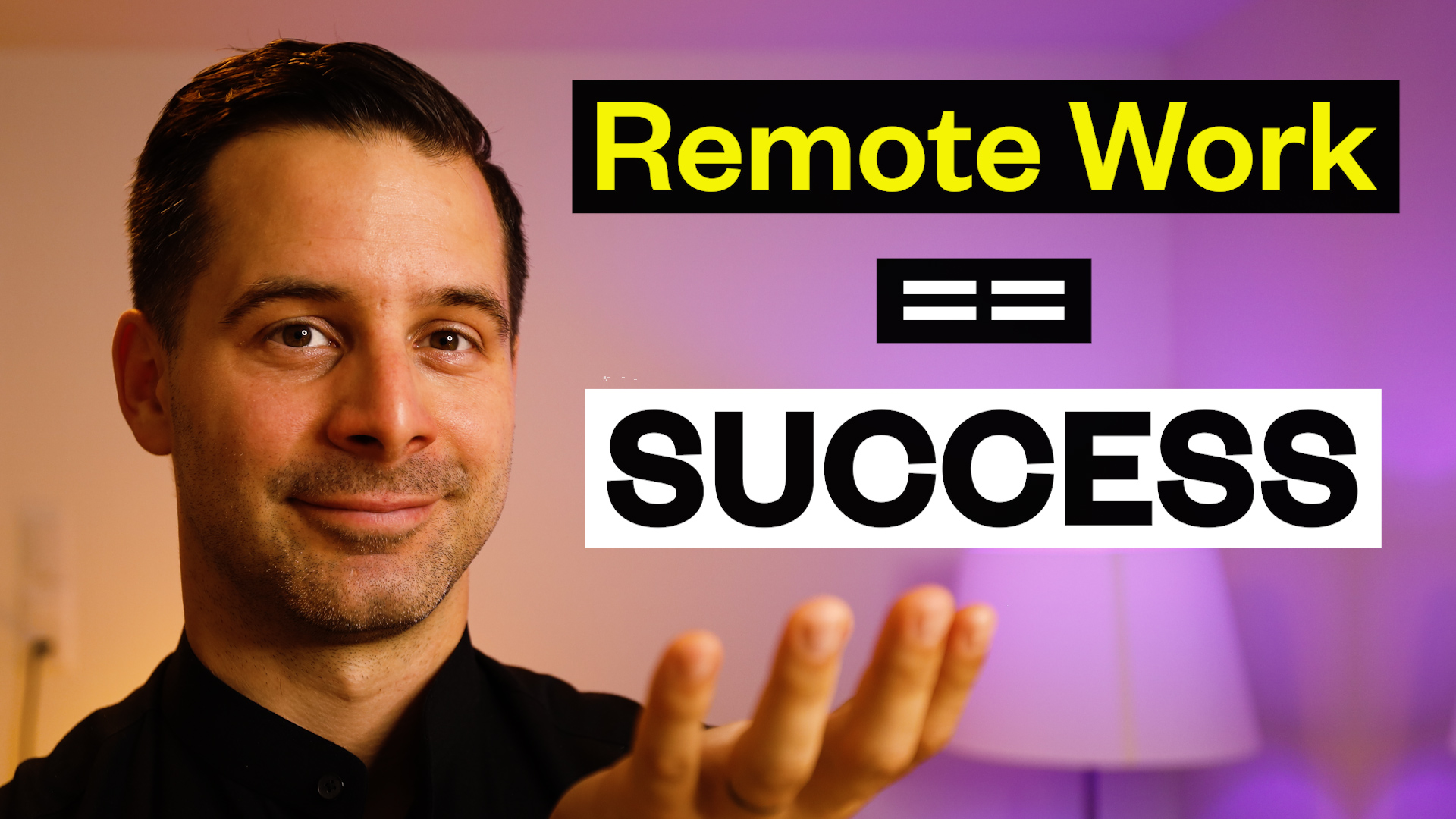 In the past 12 years, I’ve worked mostly in remote environments. Here are my thoughts on why I think having a remote setup will make you and your team more successful.

Hey. A friend and I recently had a discussion, he has a startup, and due to COVID-19, he had to move everyone into the remote office for the first time. And since I’ve been working more or less remotely for the past 12 years, he had a lot of questions about the pros and cons of what remote work generally entails. Now, if we look at the negative concerns are usually centered around the same topics: if their employees can be as efficient in the home office. There’s always the question of trust. And I’ve done a separate video on how I approach to trust in a remote setup. And then there’s also the question of control. How do I make sure someone does this or dad or doesn’t do this or dad where I can reach them in a certain amount of time.

So let’s say the potential cons or at least our fears when it comes to remote working are pretty clear. But let’s talk about the benefits that are only possible in a remote environment. So number one, from a company perspective, the number one benefit, I think, is that because I can hire from three, four or five different time zones without really making it complicated for everyone to talk to each other, I already have a talent pool that’s at least 100 times bigger than if I were to only hire from Zurich, or only from Berlin for a specific startup.

Having an office is always a bit of a pain

Number two, in a traditional setup, having an office is always a bit of a pain because either you have too big of an office or you have too little of an office, there’s rarely that moment where you hit the sweet spot where everyone has their desk, and enough space. Because to move is a lot of overhead. It takes time to find a new office to move everyone to set things up. And so typically, you want to get a space that’s bigger than what you need right now. So you can grow into it, but it also you outgrow it, and it just I’ve never seen it work flawlessly. So having an office usually is a step function, and that just is not efficient at all.

Costs that occur by having people in office

And then number three, there are lots of costs that occur by having people in office like simple stuff like lighting and electricity and all that, which could be distributed across your workforce, which will be much more efficient, because they already have all this stuff set up at home.

So those are some of the pros from a company perspective, there’s probably 10 or 20 more, but those are, for me some of the topics that I see having a big impact when you go remote first, they certainly take a lot of weight off the company’s shoulders. Now when it comes to the employee, and I think that’s the important thing because employees are always your biggest asset. And so anything you can do to make them happier and more productive, more efficient, I think you should consider at least. Number one, being in a remote setup in a distributed setup, allows your employees to work when they feel most productive. Of course, you will still have calls, and of course, someone cannot just decide to work through the night and stop working through the day. But it adds flexibility. Personally, when I was working as a software developer, I very rarely felt the most productive between 8 am and 5 pm. Some days, maybe that was the case. Other days I got up, and I felt extremely productive from five until noon, and then I just hit a low where it would have been better if I just did nothing or I went to the gym. And then sometimes late at night, I have this idea, and I just want to jump back into it to be productive. So working in a remote environment often allows us to be more productive when we really feel productive rather than just when the office our dictates us to be working.

Second, and that’s a cultural thing. I have often made the experience that employees feel more enabled when they’re given the flexibility to work in a remote office or home office. I think that just is a huge sign of trust if you let people work in a distributed setup, and for the most part, it has gone well into companies that I’ve seen the companies where I’ve been involved with, and it’s been a good experience because both sides trust each other and they also value the fact that both parties gain by giving each other trust and not abusing that trust.

Travel is probably one of the biggest perks

And number three, travel is probably one of the biggest perks that an employee can receive if they are able to both travel and work, I think that’s still the biggest goal of a lot of the millennials and generation C and Y workers of our time, they do want to enjoy their time when they’re young to go and explore new places, while at the same time being productive. And that’s something that I’ve started to do very early on, and I’ve never regretted it, I’ve sometimes had to get up at 2 am to take calls and restart servers and build stuff. But I would have done that 100 times if it allowed me and which it has to live in New York for six months, and then go live in Berlin for a while, all while building a company contributing to something productive, I would much rather do that than take time off and travel the world for six months and just travel and not be productive at all.

So I think if you’re willing to provide an environment and you set clear guidelines on what’s expected from each and everyone in your company, then creating a remote environment can be a huge gain not only for you and the company but also for each individual employee and it can become the one thing that separates you from your competitors when it comes to hiring.

I’d be curious to hear what your experience is with building a remote team, what your pros and cons are that you’ve experienced.

And if there’s anything that you disagree with for anything that I’ve missed, please let me know. I’d be happy to hear or read from you in the comments or via direct message. And with that, have a beautiful day. Stay curious, and we’ll chat soon.

Bootstrapping vs. Fundraising – How to be strategically smart about startup financing?

Four Reasons Why We Work Remotely