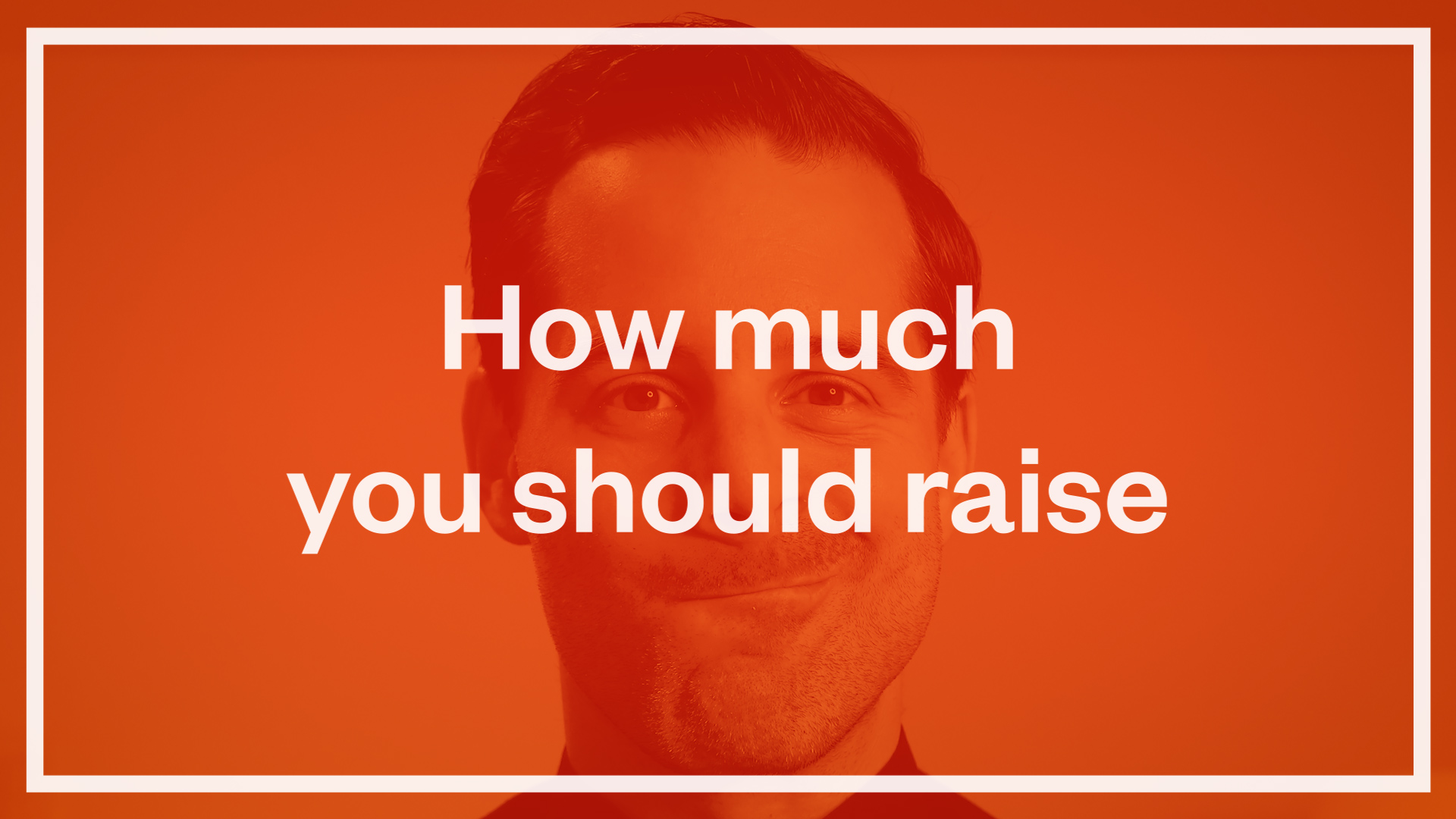 A friend recently asked me “What is the right amount to raise for my startup?” I’m sharing my thoughts on how to approach this question in this video. If you’re about to go out and fundraise, make sure you know how much you’re raising. You can calculate that number by first spending enough time on your budget and going through all the numbers, crunching them until you feel confident that you have the most likely version of reality in there. Sum up the cash-burn for the next 18 months, and then add 30% on top of it. And that’s the number you want to go out with when you start speaking with investors.

Hey, a friend recently called me. She bootstrapped her startup and is now thinking about raising money for the first time. But she had an important question for me, which was, how much money should I raise. And I want to share it with you because I think it defines quite a few things. You have to get that number right, in order to set yourself up for success for three reasons. Number one, how much money you raised basically defines whom you’re raising from. If you’re raising a 500 K round, then you’re going to be raising from business angels, friends and family, and so on. And if you’re raising a 5 million round, you’re going to be talking to Seed-VCs and VCs.

Number two, if you raise too much, that means you’re going to get diluted way too much at that point, because the value of your company largely depends on your revenues, your traction, your growth at that point, the value is more or less fixed, so depending on how much you raise, you will get diluted by a higher percentage.

And then last but not least, you could also raise too little, which means you’d have to go out and raise more money too soon again, without having a lot of time to focus on what you should be doing. Focus on your product, your customers, your sales, and bring the company to the next milestone before it’s ready to fundraise again.

What is the right number?

So what is the right number? Traditionally, it’s been 12 to 24 months of runway. That means you take your budget, and you calculate how much money you’re losing within the next 12 to 24 months, and that largely defines how much money you’re raising. Now due to COVID, I would say 1.5x that number and raise for at least 18 months of runway. Just because it’s going to be hard to estimate how much liquidity and how easy access to capital will be about a year from now.

Look at your budget

So now what I would suggest, as a rule of thumb, look at your budget, spend enough time on your budget, so you actually believe in those numbers, and you’ve thought of enough edge cases and market developments to be fairly certain that you know what 18 months of the runway look like including staff growth, product growth, and so on and so forth. And then add 30% to that number.

So 18 months of runway plus 30%. Why? Because that gives you flexibility for different scenarios. Number one, it’s not bad to have a runway for almost two years. Number two, if you fall slightly short of your target of racing 18 months plus 30%, chances are you will still end up with at least 18 months of runway, which is good. And then third, it also gives you a bit of flexibility. If you have access to capital right now, just top it up with a few months of the runway on top of it, without having to renegotiate the whole deal, because you had communicated a much lower number to your lead investor or early investor that comes in at the beginning.

So just to summarize, if you’re about to go out and fundraise, make sure you know how much you’re raising. The way you can calculate that number is by first spending enough time on your budget and going through all the numbers, crunching them until you feel confident that you have the most likely version of reality in there. Sum up the cash-burn for the next 18 months, and then add 30% on top of it. And that’s the number you want to go out with when you start speaking with investors. And with that, I hope you’re having a beautiful day. Stay curious, and I’ll talk to you soon.

Automated Video Pitches: Why?
What’s Important To Us (when we look at your startup)

Behind the Scenes of My Vlog