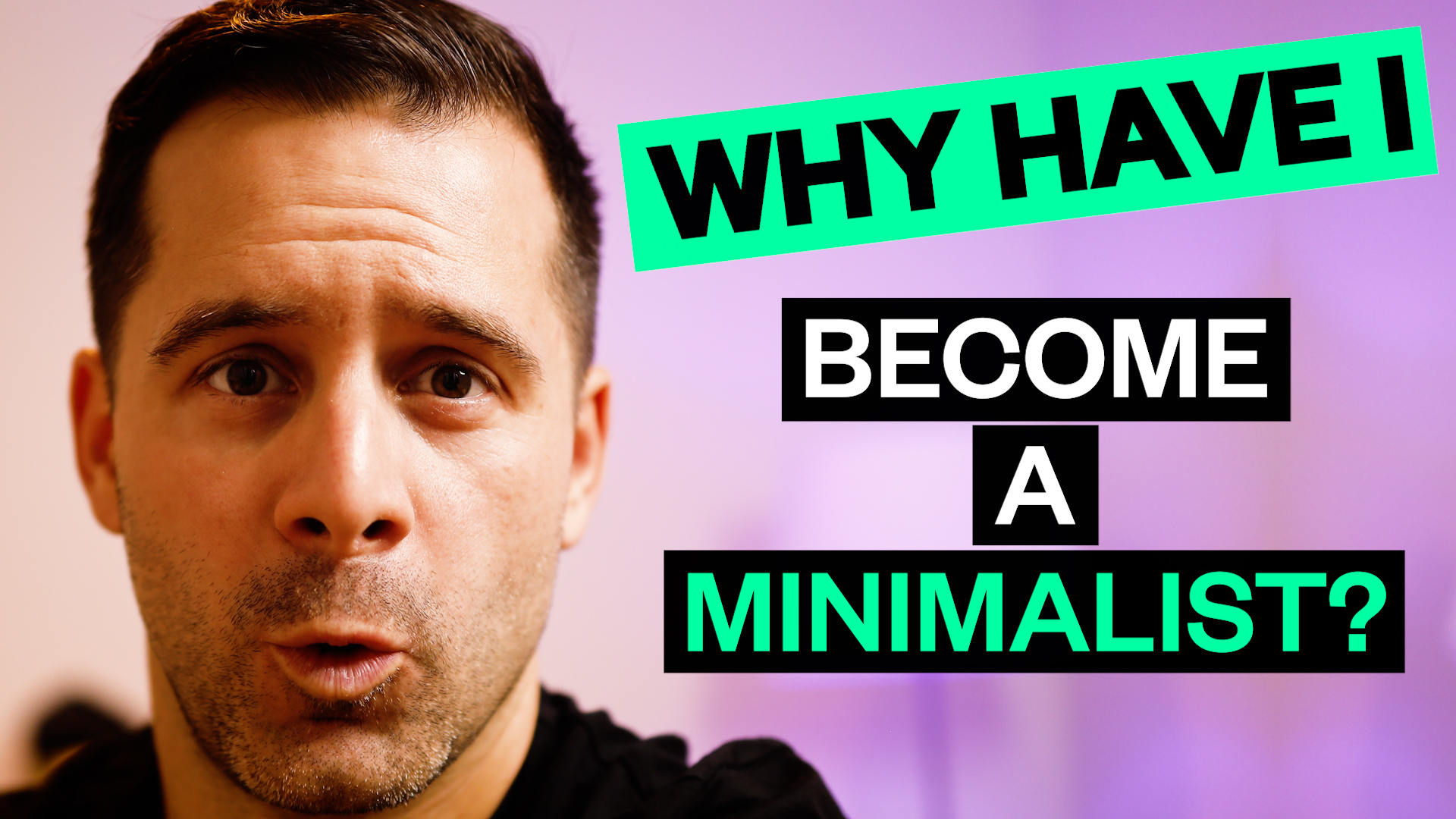 One of the most frequently asked questions to me is why did I choose a minimalist lifestyle and what does it mean? In this episode, I’ll tell you more about what influenced this choice and where did it take me.

Hey, it’s been a few years since I’ve been an extreme minimalist and have lived with less than 100 items. And so naturally, quite often I’m asked what has led to the decision to give up on a home and to give away most of the things that I’ve owned. There have been a few inflection points on my journey. But also looking back when I was a kid, I didn’t like to replace things that were still perfectly good, just so that a new shiny thing was in my house. When I was four, or five or six years old, that showed itself when my parents replaced like small things around the household, and sometimes I would throw a tantrum because I didn’t understand why they were doing that.

But in my adult life, when I started traveling more, there’s been three inflection points that led to my decision to not have a home for some time. Between 2016 and 2019, for almost four years. I’ve lived without a home and I was constantly traveling, sometimes on more than 120 flights per year. This is how this looked on a map. So, inflection point number one – I consider myself very lucky because at the early age of 14 years, I first started a company, and I completely fell in love with the process of going from idea to sustainable business. Once I had done that, I asked myself: what’s next? And I started a few more startup companies – some successful, some not successful. Right before I turned 25, I asked myself, would I be even happier if I worked in a corporate environment rather than this fragile, early-stage startup environment? And so that’s led to the decision for me to take a job with an investment bank and a very corporate environment in London. Just after arriving there, I think it took less than 90 minutes, I’ve realized that I have to get out of this as quickly as possible.

Number one, not because the people weren’t smart or driven around me, but for a very simple reason, I felt that they have never taken the time to ask themselves: what is it that makes them happy? What is it that brings them joy? Why do they accumulate resources? What are they going to do with these resources one day? And so I finished up the project, but that question stuck in my head. So I sat down, and I started journaling. Over the course of about six months, I observed myself and every time I felt happiness, I took a note about what it was. And of course, there are many reasons for us to feel happy – to meet friends, to play sports, to watch a nice movie. But for me, I realized there was a pattern around one thing, learning about how to go from idea to sustainable business.

And so at that point, when I consciously realized that that’s what really makes me happy, everything else became a kind of secondary and easy to compromise on. And so I started to ask myself, how can I expose myself to as many learning possibilities as possible, and naturally, that included a lot of travel. So even before this decision, I had moved from Zurich to New York, to Berlin, to London, to Hong Kong, and a few more stops. And at some point, while this travel was ongoing, I asked myself, how much stuff do I own. Even though at that point, I only had a couple of bags that I would usually check-in when I was going from one place to the other, I didn’t have a good idea of how much stuff it really was that I owned. And so what I decided is to create a list at the time, I still had a place near Zurich, and I went home that night. And I started the public spreadsheet listing out every single item that I owned.

I started to create that list, then it took me about two to three months to complete it. And there were two things that I learned from that. Number one, it was about 650 items that I owned at the time. And number two, and that was the more surprising thing to me was it took me about two months to complete the list, even though I only owned about 650 things because there was always this extra credit card for a business that. I have forgotten, or I’ve left some clothes at my parents’ place or at a friend’s place. So it took me quite a while to become conscious of how much stuff I actually own. And I found that fascinating. And a third inflection moment came when I came home from a trip to the US. I think I flew home from New York to Zurich. And the next morning, I got up to go back to the airport and fly to Amsterdam. And that morning, it hit me, I had only planned my travel to go through Zurich, and by that, I’ve added a few hours of travel time, a lot of CO2 emissions, and just stress that I didn’t really need, I’d only done that because I felt if I already paid for a flat in Zurich, I might as well use it a few nights a month. And of course, at that moment, it became so clear to me that I want things to be there for me, and contribute value for me but I didn’t want to be there for things.

It shouldn’t be the case that I’m spending time and energy on the things in my life. And that was the morning when I decided to give up on my flat. And for a few years, I’ve lived very happily traveling constantly, always being where I felt I could contribute the most value that’s in line with my mission. And those years were extremely powerful. I’ve met lots of interesting people. I feel like I’ve learned a lot about how to go from idea to sustainable business. And so I would never want to miss that time in my life. That has shown me how big decisions sometimes and consequential decisions can sometimes seem disruptive at first, but give a lot of value in my life. So just to quickly summarize, for me, the reasons why I’ve become a minimalist and lived without a home, were three inflection points.

Number one – the question: what is it that really makes me happy? Number two – I got kind of stuck on this question: how much stuff do I actually own? And why does it take me so long to become conscious of everything that I own? And then last but not least – I felt like. I was attached to my things and I was spending time with things instead of them just purely being there for me.

Hopefully, this was helpful. If there are any questions, please let me know in the comments. And with that, have a beautiful day. Stay curious.
I’ll talk to you soon.

A Day With a VC (Part 2) – Hiring Process, Board Meetings & Calls
Hanging From a Rock in the Middle of the Night

A Simple Exercise To Improve 12 Areas Of Your Life

Q&A Video: How To Decide Which Startup To Invest In