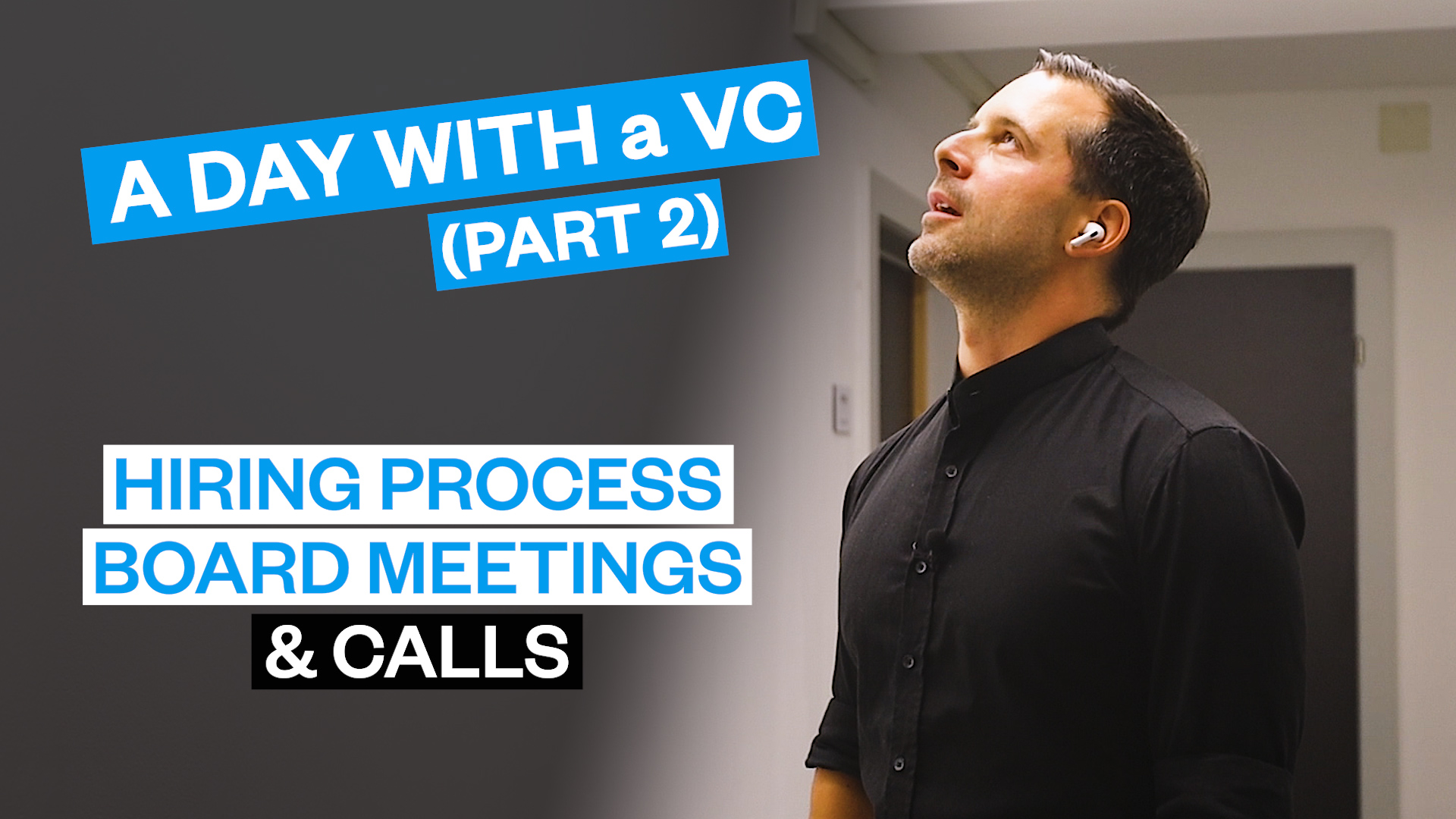 A big part of my job as a VC is connecting (with) people, catching up on projects, be a sparring partner, and offer guidance on different challenges. Naturally, my day consists of many calls, which this episode is about. Watch it to get more insights on our hiring process, interviewing candidates, board meetings, the differences between a full and an observer board seat, and more.

We’re hiring a new assistant for Tomahawk.VC and because Tomahawk in it by itself, we don’t do not only invest in remote companies, but we also are a remote company ourselves. So when we are looking for the right candidate, we’re not just looking in Zurich, or Berlin or other places where we already have a presence, or we’re looking everywhere. And now I’m going to talk to one of the candidates. He’s actually in Ukraine right now. And the goal of this call is just to get to know him and see if there’s a cultural fit. I’m excited to be to finally be speaking to you, how are you?

Where, where in the world are you right now? And so that’d be the motivation behind that. Yes, that will be the next step. Okay. Do you also create content yourself? Cool, I see that our time is is already up. It’s been great. Getting to know you. We’ll chat soon. Bye, bye. Cheers. I just talked to one of the candidates that we’re currently talking to for a new role. On another occasion, I’ll chat a bit more about our hiring process.

But basically, all the candidates that we talked to, they’ve already gone through a list of self-selection processes. they’ve submitted a pretty lengthy survey. And so right now we have three or four that we’re still talking to, is a great example for someone that portrayed themselves very well, in written form. But now when we spoke to one another, I could actually tell pretty quickly that there was no much of a cultural fit. Because he didn’t think a lot about what it actually is that we do, he doesn’t seem to be too excited about our field of work. He never really, except for listening to one documentary a while ago about Venture Capital, he has not really thought about this much. And so this quick phone call where I mostly let them talk I, I asked him to give me a lot of questions and show me which things he understood and and also, where he has questions, is usually a great step to then go from four candidates to the one, top one or two, where we’ll go into really intensive talks and do test tasks as well. So he’s not a great fit, really nice guy, though. He was great speaking to him overall. Now, I’m going to jump over here. And I’m supposed to join a board meeting, I think in a couple of minutes from now.

Hey, so we’re just taking a quick break from the sport reading. And I think I can do at least a whole episode or several episodes on how to structure a startup board meeting because I think there’s always ways to improve this one as a very well structured one. But one thing that I quickly wanted to mention is the difference between a full board seat and the word observer. A full-board seat means a voting right for board seat, that’s usually a seat that we would take after we invested after we let the round until a certain point, and then at that point, be converted into a board observer seat or we leave the port altogether.

For a lot of companies, I like to stay on the board and keep in touch with them contribute value, but also learn from what’s going on in the company. And the board observer is the right way to do that the Board of surrogacy the right to attend board meetings and participate in discussions. But it doesn’t give you the right to formally vote on decisions, which, if I’m honest, isn’t the most important part anyway, because most decisions are made by consent. And so you talk as long as it’s as it takes to get everyone on the same page. So that’s just a quick one in between. I’m going to go back into the board meeting now. But that’s the difference between board observers and full board seats with foreign rights.

So we just finished this board meeting and have a couple of minutes until the next call. What I usually use this time is to quickly take notes and write down takeaways, things that I’ve either learned which go into our wiki, things that I need to do in the next week or so because I’ve promised intros or I thought of someone to connect the founders to, that I keep in Asana. And then I also keep a quick list of takeaways in our CRM. So that the next time I go into the board meeting, I have a quick reminder on what we’ve discussed and decided last time. Now, this next call is with a global community for EO.

EO is an entrepreneurs organization. It’s an organization that connects 15,000 entrepreneurs worldwide. And I’m part of a committee that helps you organize for other users. Of course, there’s also been lots of challenges because these events in the past were mostly offline. And since COVID, no offline gatherings are happening around the world, people are not traveling. So these calls have been we usually do a monthly call where we work on how do we best provide our members, all these 15,000 entrepreneurs with tools to connect with one another across the globe during a time of crisis?

Yeah, yeah. That means we would probably meet at their place already around 8 a.m, After 12:30 a.m. they have an open-ended appointment. Call number, I don’t even know how many today.

So that was a TV producer from Germany, they produce a show called Galileo and they are gonna concert next Tuesday to follow me for a day. And don’t ask me a few questions about why. On the one hand, do I invest all my money into startups? Highly risky, but also rewarding? And at the same time? Why do I not even own a car? or Why did I give up on owning most things in my life? So that’s what we’re going to talk about.

Okay, that was another roughly three hours of calls. Lots done. I have another two hours of calls later on, but I now have a break of about 60 minutes. And I’ll use that break to sit down with Marcel and talk about our day to day and everything that we’ve captured, and we’ll talk about how to continue to experiment.

Quick note about the calls. Usually, I spent about six to eight hours, just on phone calls or zoom calls with people. And one thing that often helps me stay focused and stay active is to continuously take notes. So we’ve got a beautiful day. Stay curious, and I’ll talk to you soon.

A Day With Cédric (Part 1) – The Zurich Startup Ecosystem
Why & How Have I Become a Minimalist?

[Video] Presence Is The Best Present