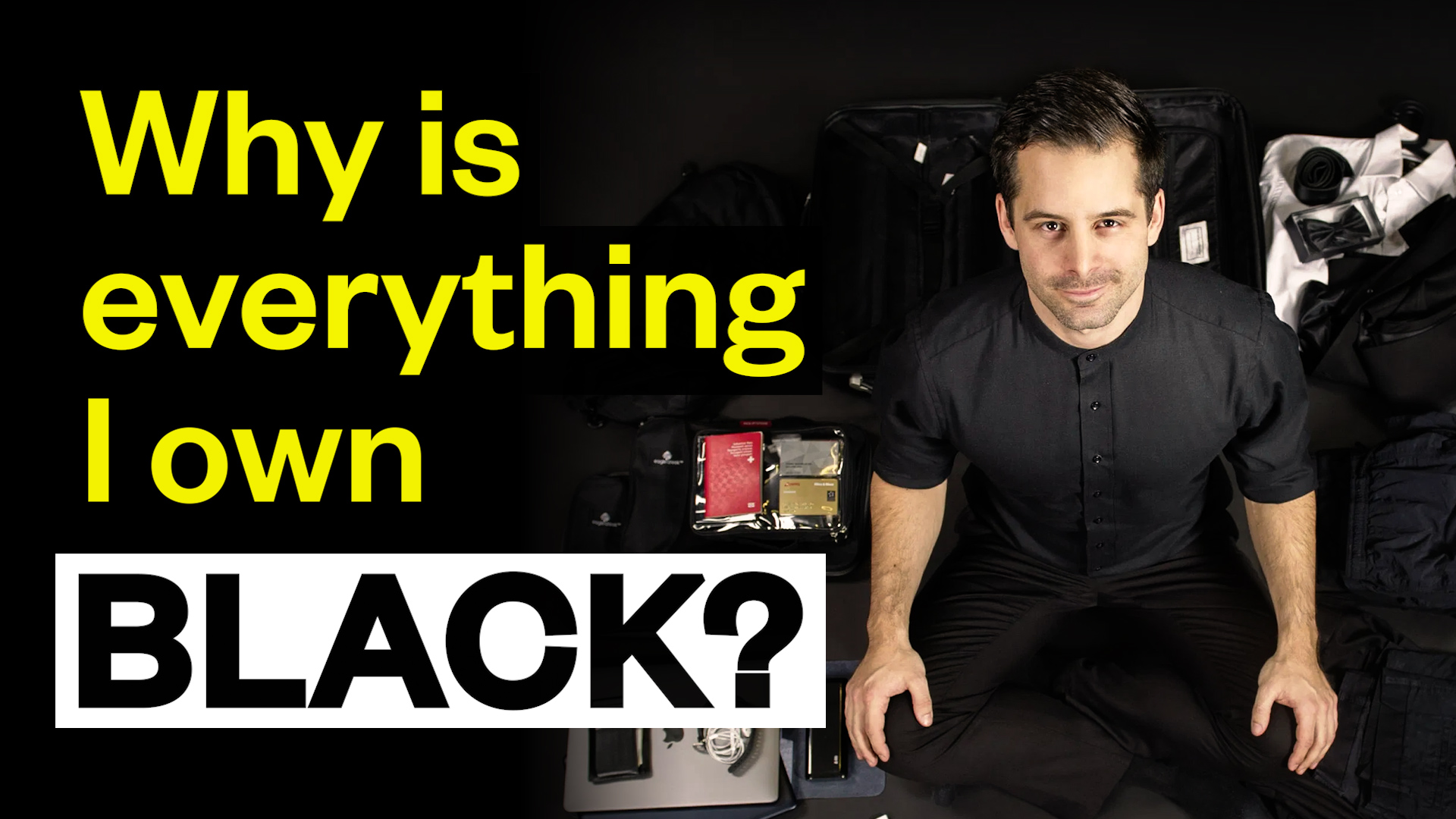 (Almost) Everything I own is black. Watch the video to find out six reasons why.

Hey everyone. Today I want to talk about a question that I’m often asked about my minimalist lifestyle. The question is, why are almost everything I own and everything that I wear black? There are a few reasons. But before we get into the reasons, I’ll give you a bit of context.

Minimize the amount of stuff that I have

About six or seven years ago, when I was first trying to minimize the amount of stuff that I have, it all started with a question, how much stuff do I actually own? At the time, I had already moved between Berlin, New York, London, Hong Kong, and a few more places back and forth, and most of my stuff fit into two big suitcases. But at this point of time, I had moved back to Zurich, and I was living in a flat just outside Zurich.

For some reason, this question got stuck on my mind, how many things do I actually own? And what was fascinating to me at that time, I didn’t have a good feeling for it. I didn’t really know whether it was 100 things or 500 or 5000. Well, I guess it was not 5000, but other than that, I didn’t have much of a clue of how many things I own.

So being trained as an engineer, what I did was I went back home into my flight, and I started a spreadsheet. On that spreadsheet, I started to take note of what item it was, what color, how many of these I had, and how much it cost because that was the information I was wondering about. And so I started this list, and there were two things that were interesting for me once it was complete after about three months.

Number one at that time, I owned about 650 items. So finally had a number. But then number two, much more interesting, was it took me about three months in order to get this list completed. So there were a few things that I didn’t consciously own. There were some t-shirts and shirts that I left at my parent’s place. There’s an extra credit card that I have for my business, and I kept it at the office. And so in order to complete the list, what I decided was to make the list public and made it public for my friends and family so they could call me out if I have forgotten anything. And that over the course of about three months led to a pretty complete list. You can still look at my list and everything that I own on my website currently if you go to cedricwaldburger.com/list/, and you’ll find that most items I own today are black.

There are a few exceptions for one, my AirPods Pro, which only coming white so far, I actually used to own AirPods before that were made in Black. There was a company in California that painted them, Black. So that was a bit of gamification. And then also my Swiss passports, they are bright red, and that’s the only color they come in right now.

Why is everything else black?

So back to the original question, why is everything else black? Well, there are a few obvious reasons that you might have intuitively thought of and number one wearing all black means I never have to think about what goes with what. Number two, you can wear black to almost any occasion. I even got married wearing Black. Number three, Black doesn’t stain as easily as, for example, white or green. And then number four, I only have to do laundry once I have to wash my clothes at least every seven days. And when I do, it all goes in one set instead of having to do two or more loads if I was wearing different colors that couldn’t go in together.

So those are some of the obvious reasons. But there are two reasons that are very pragmatic and might not be as obvious. Number one, besides minimizing all this stuff that takes time and energy from me, I also tried to reduce non-important decisions in my life, meaning I like to spend my decision energy on what startups to invest, which founder to back, whom to hire, how to refine our thesis, all these types of things. And I don’t like to spend my decision energy on stuff that doesn’t have a long term benefit to my well being. And one of the things I don’t like to spend time on is what color to pick something. So once I do decide that, for example, I need a new pair of sunglasses, or I need a new laptop or a new I don’t know water bottle, I know that I can just get it in Black because that’s usually the default color and that saves me one step in the decision process.

And then last but not least, a very pragmatic reason is that when I travel, I often stay at Airbnbs and hotels, and typically those places would have white bedding, white sheets, and if I’m only staying there for a couple of nights, I usually just dropped my stuff on the bed. And it’s much much harder when I’m packing again to forget a black shirt on white bedding than a white shirt. So over the course of four or five years when I’ve traveled so much, I’ve never even lost a single item because I left it behind because it’s so easy to spot everything, even if it’s laid out on the bed.

So there you have it. These are some of the very obvious and maybe not so obvious reasons why everything I own and wear is black. And with that, I wish you a beautiful day. Stay curious. I’ll talk to you soon.

When do VCs Cash Out?
Who inspired me the most?

[Podcast] On Essentialism And Living With 64 Things