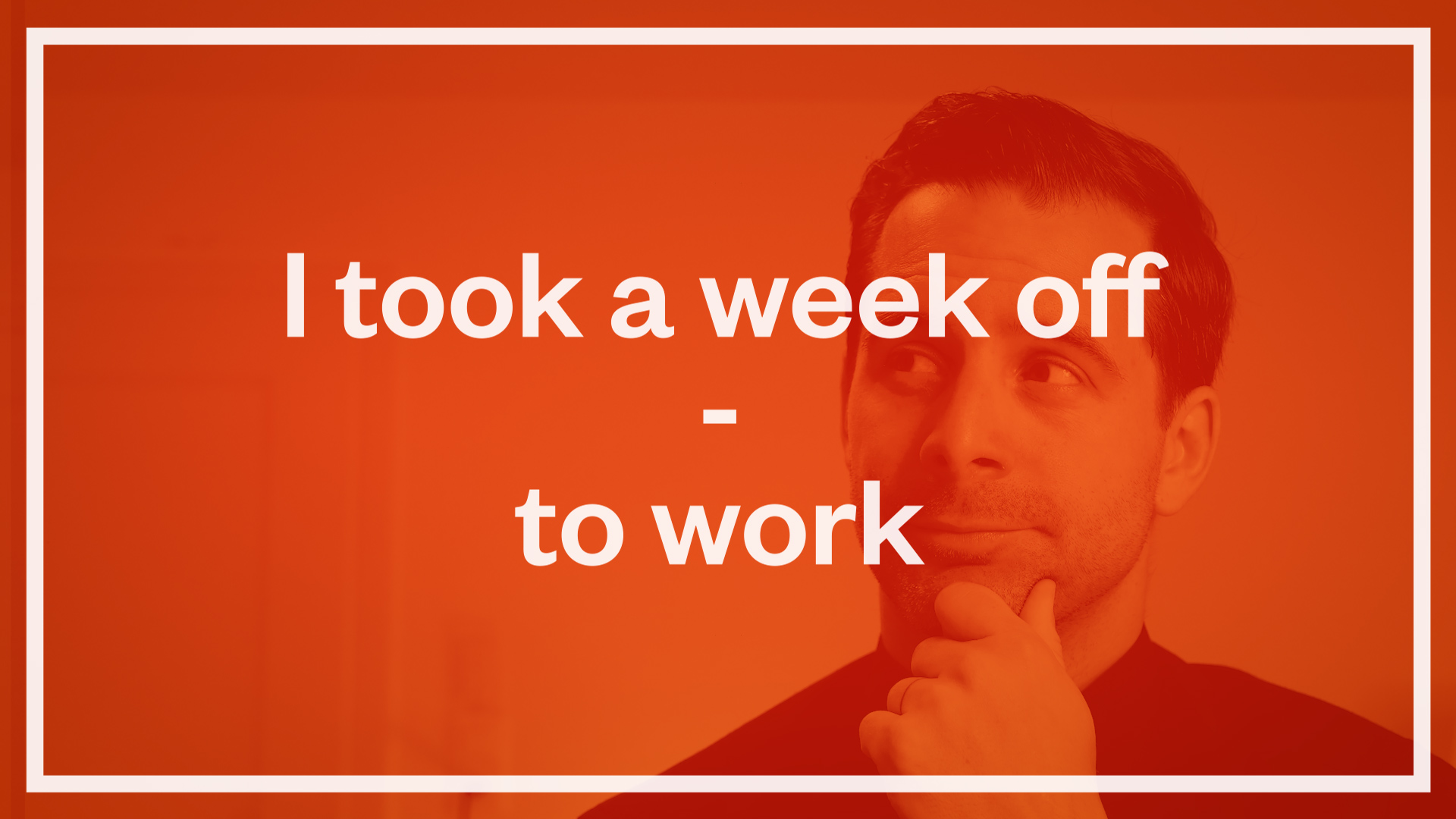 I’ve done my first ” think week” last week, and it was definitely not my last for two reasons. Number one: I made a ton of progress on some very important long term initiatives, and that just felt good. A lot of the thoughts that had kind of accumulated in the back of my mind, I was finally able to dump them on paper or into a document or into a process. And I feel we’ve made a big step forward as a team: my team handled everything flawlessly, which was also a great thing to see that I don’t have to be as involved every single day, and things will keep running.

Hello, if you texted me last week or sent me an email, chances are you didn’t get a message back for a very long time, or you got an autoresponder saying that I was doing a “think week,” and I was not looking at email. The week, since we’ve launched, has definitely been a lot of fun. But the week has also been super full. There’s been hundreds of calls and meetings both with founders and co-investors and partners. And while that is all fun and productive and efficient, I needed some time to think.

How can an investor create value?

I think there are multiple ways of how an investor can create value: speaking to core investors, speaking to portfolio founders, as well as speaking to potential new investments. Obviously, it is a big part of how we create value, but then I also believe that taking time to think and strategize and think about market developments, and what’s happening in the world right now it’s just as important for investors to do every now and then. And since my calendar tended to fill up even short term, even if half of the day used to be free at the beginning of the week, by the time that there was only one or two days away, it had typically filled up; I decided to take a more drastic measure and completely block off a full week from my calendar. I call this my “think week” and I communicated before the week to people that I have been closely working with to my team, obviously, that I will be taking a full week off where I wouldn’t open WhatsApp, I wouldn’t look at email, and I would spend most of the time just sitting here thinking and creating or writing about something.

What did I do during that week?

So what did I do during that week? Well, on Monday, the first day, I decided to go for a long walk and to think about my priorities. I have a long list of things that I want to write about or think about or build systems for. While it’s tempting to attack a number of projects in that week is a week might sound like a lot of time, but I decided to restrict myself to three topics where I wanted to make a tangible impact.

So the three areas that I decided were most important for me to make progress on were:

Number one. Think about deal flow and how we want to structure for Tomahawk. Deal flow obviously is the name of the game for any investor. Getting access to the right deals, and then filtering them quickly, ending up with the best deals and putting a lot of time into those is what makes the game for venture investors.

The second topic that I wanted to spend time on is automating and structuring more processes for my team and me. Obviously, the more time we spend thinking about the same thing throughout the day, the less efficient we are. So I wanted to take time to think about what are things that we often do, and we need to do really well and put them into writing so that we don’t have to strategize throughout the day anymore, but we can just follow a plan that’s outlayed for us.

And then, the third topic that I thought about is the future of Tomahawk. Two years from now, where do we wanna be, and what do we need to do today and next month and in the next six months in order to get there within two years? So that’s what I did on Monday, and I then spent the rest of Monday up until Friday afternoon working on these three topics. Friday afternoon, I took about two to three hours to number one: write down my conclusions, so that I would end up with a finished result, which was satisfying and also helpful because it gave me something to communicate. Even if none of these topics are a hundred percent done, I got them to a point where I was able to communicate them and share them with my team, so we had some tangible impact from the week thereafter.
Second, I did a video to walk my team through those changes and my thoughts behind them. While I often think it’s important to keep documents very short and concise, I also believe that it’s important to give background and context if you’re announcing strategy changes, or refinements and I did that by recording a loom and sharing that my team. And then, third, I also captured my thoughts regarding “think week” and how I would do certain things slightly differently and which things work really well, and I would definitely keep them for a future iteration.

And some of those learnings I want to share with you in case you are planning to do a ” think week” in the future, or just maybe a couple of think-days, where you block off your calendar for some focused work on long term initiatives.

Number one. Think about how to deal with urgent matters.

An urgent matter might just be phone calls coming in, but it might also be a team member of yours, pinging you for any given project that requires urgent response right now. What I personally realized is that out of the five days that I was trying to block, I succeeded on three of them, and two of them I did not succeed at all. I got pulled into spontaneous meetings, into calls, I had to get back to some emails or look over some proofreads that my team had prepared. And while overall the week was a great experience, I definitely want to spend more time to think about how I want to deal with urgent matters and also proactively communicate to my team, what they can just take and run with and which matters, which few matters I actually want to be involved with.

Five days might seem like a lot, but time always runs by quickly, especially if I’m deep in thoughts, and I’m just creating new strategies and new work. So I’d say for a future week, I’ll probably even try and narrow it down to just two topics for myself. What I do think is absolutely crucial is that you don’t overload yourself. And in the end, you just have more work by the end of the week, because you have five projects that you’ve started the none of them are finished. So I would definitely say this is another area where less is more.

And third, and this was very hard for me. Put your phone away, close your email client, and kind of shut off yourself from any type of communication.

I even thought about going back to paper and just writing on paper, because that obviously offers zero distractions. It didn’t quite work for me because I had to do a lot of research for some of this, I wanted to read, and I prefer doing my reading on my laptop but what I did is close everything about my browser. And even in my browser, be very restrictive with opening new tabs. And make sure I don’t go on social media or open Gmail or any other communication media.

So, in summary, I’ve done my first ” think week” last week, and it was definitely not my last for two reasons. Number one: I made a ton of progress on some very important long term initiatives, and that just felt good. A lot of the thoughts that had kind of accumulated in the back of my mind, I was finally able to dump them on paper or into a document or into a process. And I feel we’ve made a big step forward as a team. And then number two: my team handled everything flawlessly, which was also a great thing to see that I don’t have to be as involved every single day, and things will keep running.

Now, if you consider doing a “think week” sometime in the future or you might even have done one in the past, please let me know what your experience was in the comments. And with that, have a beautiful day, stay curious, and I’ll talk to you soon.

How to make Meetings efficient and fun
Welcome to my channel!

What is DFINITY And How I Got Into Crypto

Tomahawk.VC: The companies we look for