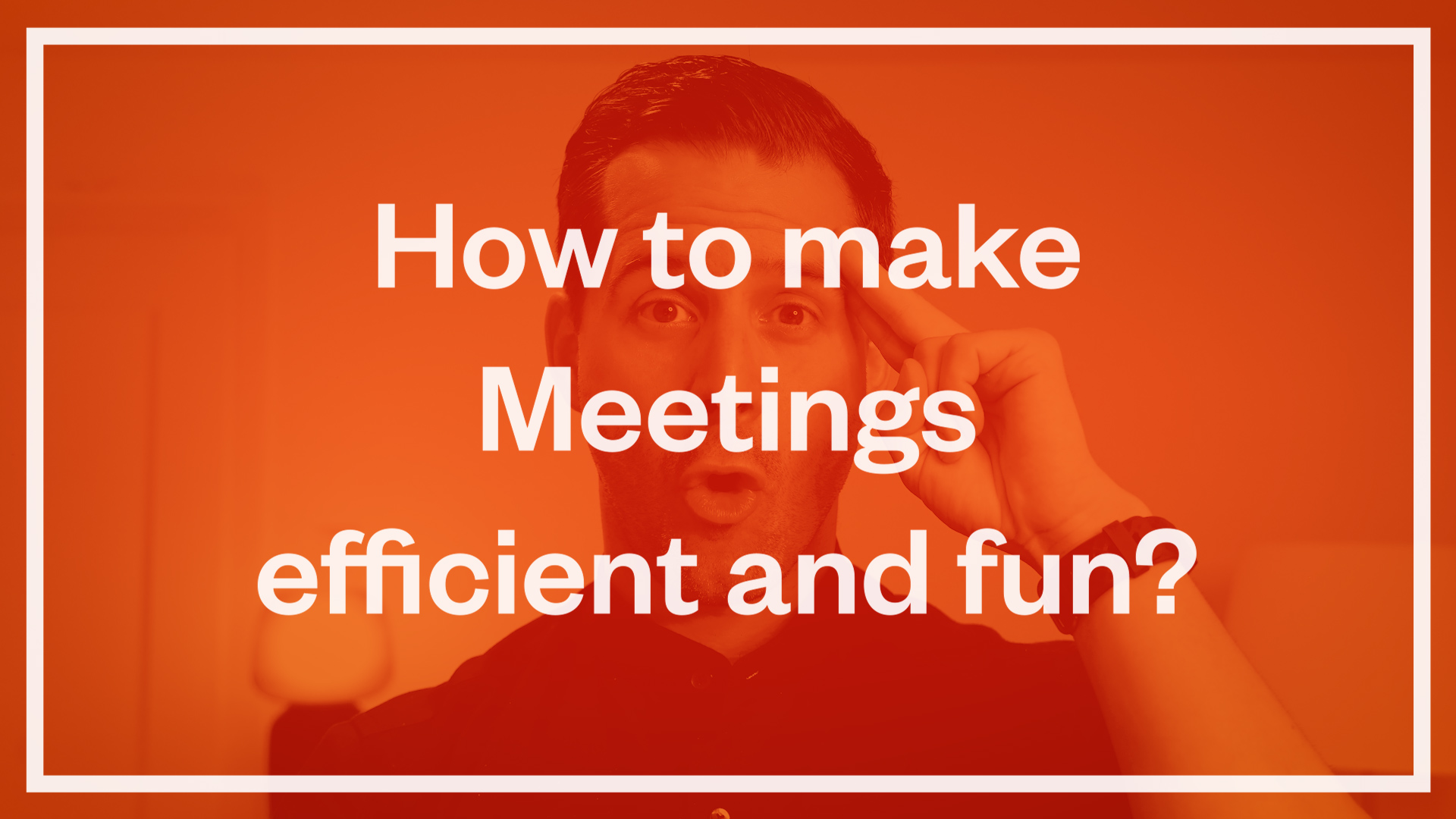 With over 150 meetings in the last three weeks alone, it’s natural for me to think about how to keep meetings fun and productive. I’ve recently discussed this topic with a founder, and here are the five learnings I shared with him.

Hello, a couple of days ago, I was on a catch-up call with one of our portfolio founders. One of the questions I often like to ask during those calls is, what’s been a time drain for you since we last spoke? And by time drain, what I mean is an activity that either took way longer than expected or just took so long that it frustrated you? And his answer was surprising. He said, the meetings with my co-founder. Now they both get along great. They’re a great match for each other. And there’s definitely no team dynamics at play. So I thought probably this is more about how they structured their meetings. And we talked a bit about what they do. And I also shared five learnings for me on how to make meetings more efficient and fun.

Why is this important to me?

Well, if I look at the last three weeks in total, I have more than 150 different meetings. That means, on average, per weekday, I have ten different meetings. And so it’s natural for me to think about how to make myself not miserable and how to keep meetings, fun, engaging, and productive.

So I want to share the five learnings that I shared with him. Learning number one is a meta-structure for regular meetings. What do I mean by that, if you have a regular meeting, let’s say you meet once a week or every two weeks or once a month, even, it’s easy to come up with this structure the first time and then keep that same structure with the next weeks, days, months or whatever. And often, what I realized in the past is that the first meeting I get a lot of value from that structure. But later on, it doesn’t really serve me well. An example might be if I catch up with a founder, the first time we might talk about HR, sales, tech product, and fundraising, maybe those five topics. And that’s great for the first meeting because I need that download, I need that braindump from the founder, where do they stand? And where’s the company right now and what’s the foundation that we’re working with. But what I realize is that the next meeting by keeping that same structure, we dive into topics that are less important than others, what I mean by that they might have had a great month in sales, might have had a terrible month in tech. But we still cover all those five topics so that everything is kind of equalized. And so that’s why personally, I like to come up with what I call meta structures or meta agendas for meetings. And a meta agenda is higher-level questions that will always lead you to what’s most important in my case, I just want to know what goes well, what doesn’t go well, and how can I help? So the question I often ask is just what were the top three highlights and what were the lowest three lowlights since we last spoke, and I encourage you to adopt several metta agendas for regular meetings that you might have and just experiment with them. You might not hit the right questions at the first try. But what I can almost guarantee you is if you think about it this way, your agenda will become more fluid more dynamic. And it will generally serve you better.

Learning number two that I shared is keep meetings as short as possible and not as long as planned. Sometimes we plan meetings for an hour or even longer because we think that’s the time we will need to go through all the points. And then we realize that we progress much quicker than we originally expected. So sometimes for these founder catch-ups, I typically have one hour scheduled. But then often I try to finish after 30 minutes or 35 minutes if that’s the point where I feel all the value has been transferred and all the critical points have been discussed. That not only means that the founder now has another 30 minutes to work on what he finds really important but also for me, I have 30 minutes to process what we talked about, write about it, and potentially sent him already some takeaways. Intros that I’m going to make or content that I was going to share with him.

Personally, I’ve realized that for me, the ideal meeting duration is about 25 minutes no longer and that I can be very engaged and very focused during 25 minutes if I get all the important information transferred before the meeting. So one example of how I do that for me is I do a lot of intro calls. And what I’ve realized is that of the 25 minutes that I have with a founder with a partner or potential co-investor, five to 10 minutes are often just spent by me introducing myself, and that’s why about a year ago, I decided to just capture my intro on video and send that video before the call. So now we both have five to ten minutes more to discuss more important topics. And also, it’s not just me downloading information into the other person’s brain, but we can have that time available for discussion.

Learning number three: split meetings up. We might think that bigger topics and bigger problems require longer meetings. But my thesis is that they do not require longer meetings, but they require more meetings. So if it’s a big problem, usually what we do is we come together for 25 minutes, and we brainstorm. We define and assign responsibilities. And then we go back, and we work by ourselves. That’s a crucial step. Not only can I be more focused if I’m not in a call, but I also, I am not taking anyone’s time while I’m just sitting here thinking about how to solve the problem and make progress on it. And then the next day or that evening, or maybe even the next week, we come back, and we share our results. We combine them, and we decide whether we need another meeting or if the problem has already been solved.

Learning number four, asynchronous for data. What I mean by that is send data asynchronously. Do not wait until the meeting to just tell everyone about something that they could have read before to me thing, reading or watching something on our own is a lot less tiring, it’s a lot more efficient. And for most of us, it’s also allowing us to memorize things more. So send data before the meeting, give everyone a chance to arrive at the meeting as prepared as possible so that then you can use the meeting time just to discuss things.

And that leads me to my fifth and last learning, synchronous for discussions. While sometimes we might get frustrated with the amount of meeting that we are assigned, it’s still important to have meetings. I’ve seen many occasions where we were trying to have discussions on Slack, WhatsApp, or any other asynchronous channels, and they couldn’t be less efficient: people drop out without telling everyone else, so someone remains there waiting for someone’s answer. It’s just not a good way to come to conclusions and to quickly exchange thoughts and emotions, which is also important. So don’t be afraid of scheduling meetings short term and keeping some time blocked in your calendar. So you always have that available to either do focused work or schedule an additional meeting in your day that you can either use or not use depending on what’s going on that day.

So those are the five learnings that I’ve shared. Number one, meta agendas, keep the agenda dynamic and fluid, and make sure it always adapts to your needs. Number two, keep meetings as short as possible, not as long as planned. Very important. Don’t just use the hour because you’ve blocked an hour, use as much time as you need, and then get off. Three split them up. Make sure to split bigger discussions into smaller discussions. So you give people time to process and think between meetings. Number four, asynchronous for data, give everyone a chance to arrive at the meeting as prepared as they can be. And number five, synchronous for discussions. Some topics are just more easily discussed if you get on a call. So keep some time in your schedule. So you have the flexibility to schedule one more meeting per day.

Those are just five learning. I’m sure there are hundreds more. Having efficient meetings that are fun and productive is a big topic. So I’d be curious to hear from you. What are some things that you’ve learned over time for how to make your meetings productive and fun, please let me know in the comments?

And with that, have a beautiful day. Stay curious. And I’ll talk to you soon.