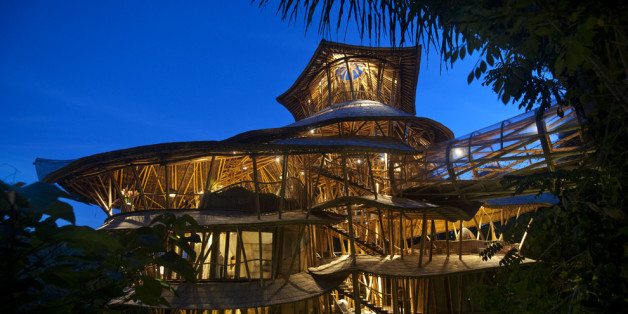 This Entrepreneur’s Organization trip to Bali was truly one of a kind. We stayed at a five-story bamboo treehouse, explored Ubud and had a number of intense sessions. Only two and a half days but it felt like a full week of unforgettable experiences!

So this place is absolutely fascinating. The first thing you want to do when you see such a view – get out your drone… and take a shot from there.

Just got to walk over to a van and then we’re driving up to Ubud.

That looks like our van. Let’s see who’s here.

So we’re getting closer. We’re in Ubud now. And we’re looking for our tree house. We’re staying at five-story treehouse for the next few days. I can see some Bamboo houses here. But not sure if that’s the final destination yet.

This is 20 minutes south of Ubud but somewhere on the way to Ubud. Certainly feels a lot more like a jungle here than it did down in Seminyak and Kuta.

A bamboo treehouse in the jungle

I’m super curious how this is going to look and work. The pictures looked amazing and it looks like we just got to the entrance.

Everyone’s excited about the location. It’s just a guest house but it already has three bed, it looks pretty cool, it’s all bamboo.

This is the five-story treehouse or bamboo house that we’re renting for the next few days. It just looks gorgeous. We can’t wait to get in there. Right now the guest is still in there so we’re just in one of the guest houses next to it.

This place is just super interesting.

[Ricky, what are we going to have for lunch?]

[Duck and veggies… I’m just looking forward to the dessert bar tonight. That’s where my focus is.]

[I’m excited for some deep sharing and learnings from some pretty awesome people so that’s what I’m really looking forward to.]

One meal per day

We made it to Ubud now and we’re going to have lunch in this place here.

So we just finished lunch at this restaurant here. Unfortunately, I didn’t have lunch because I’m sticking to my one meal per day fasting. I’ve had a bit of coconut juice. From what I could tell, the food was pretty good here. And then we did about an hour of sharing.

We introduced ourselves, gave a bit of background on our personal lives and our businesses. Also talked about how we can be present within the next few days. If anyone has any calls coming up or anything that’s stuck on their mind or in the back of their mind constantly that keeps them from being fully present.

Now we’re headed over to tour a co-working space and then do a bit of sharing there.

So we just finished the first part of our tour here. Q&A with Michelle who’s the community manager for Roam space here in Ubud.

[What was your number one takeaway?]

[I think it’s a really interesting concept. I think it’s really cool – connecting people that might be lonely or might be looking for more of a community space rather than living alone in an apartment on the 20th floor by themselves and not having as many social engagements. So I think it’s an awesome concept, I’m excited to have a look around.]

[We’re just live right now in Roam’s superior suite. So here’s the bath… and the toilet.]

[What’s that under your hat there?]

[I think it must be DFINITY.]

[We went to Roam Co-living space. My idea for years.]

[Because you’re also running a co-living space in China?]

And all E under 30 members can come stay with you in Shanghai, right?

Shanghai is probably the destination of one of our next events.

Inside a bamboo treehouse

So we’re getting back to the bamboo house and it’s time to check in. See this place from the inside.

This place is absolutely fascinating. People are just running up and down like little kids trying to find all the rooms. There’s a rooftop which I haven’t seen yet. There’s a total of five or six stories.

There’s a TV room, massage room and it’s all bamboo. And there’s this incredible view from here. I don’t think it will come off on the camera anywhere as impressive as it is in real life but still – so nice. The first thing you want to do when you see such a view – get out your drone… and take a shot from there.

Before leaving for dinner, which we’re doing right now, we worked on an exercise called “lifeline”. It’s an EO exercise.

Take a piece of paper and a pen and use the horizontal axis as time and you map out the time between the day you were born and today. And then on the vertical axis, you map out how happy you were during those parts of your life.

You start by breaking down the horizontal line into five-year segments or one-year segments. And then writing down key moments in your life. This could be positive moments like marriage, getting kids, finishing school, getting your first job, starting your first company, getting to the first million… And negative events – breakups, heartbreaks, people you’ve lost and so on.

Then you map out the line between those points and you visualize how you felt and how present you were. And then you prepare that and you present it to the whole group. And you talk for maybe 10 to 15 minutes and present everyone your lifeline. So the line that connects those dots is what we call the lifeline.

So it’s a very popular exercise. It can be quite emotional. And it’s intense. Because you get to hear about the worst and the best moments of people’s lives and nothing in between.

So we started doing that. Now we’re going to head out to dinner and then tomorrow we’re going to continue that. And just one takeaway – for me, it’s actually cool that Elena is here. Because we get to share our lifelines with each other and I learned some stuff about her that I might otherwise not have known.

And so if you have friends or partners that you feel you want to connect to through a certain exercise, maybe lifeline could be a fun idea to do.

Now we’re going to head out to dinner and with that – I’ll talk to you tomorrow.

Leave Your Job – Become An Entrepreneur

[Video] Why I Travel So Often