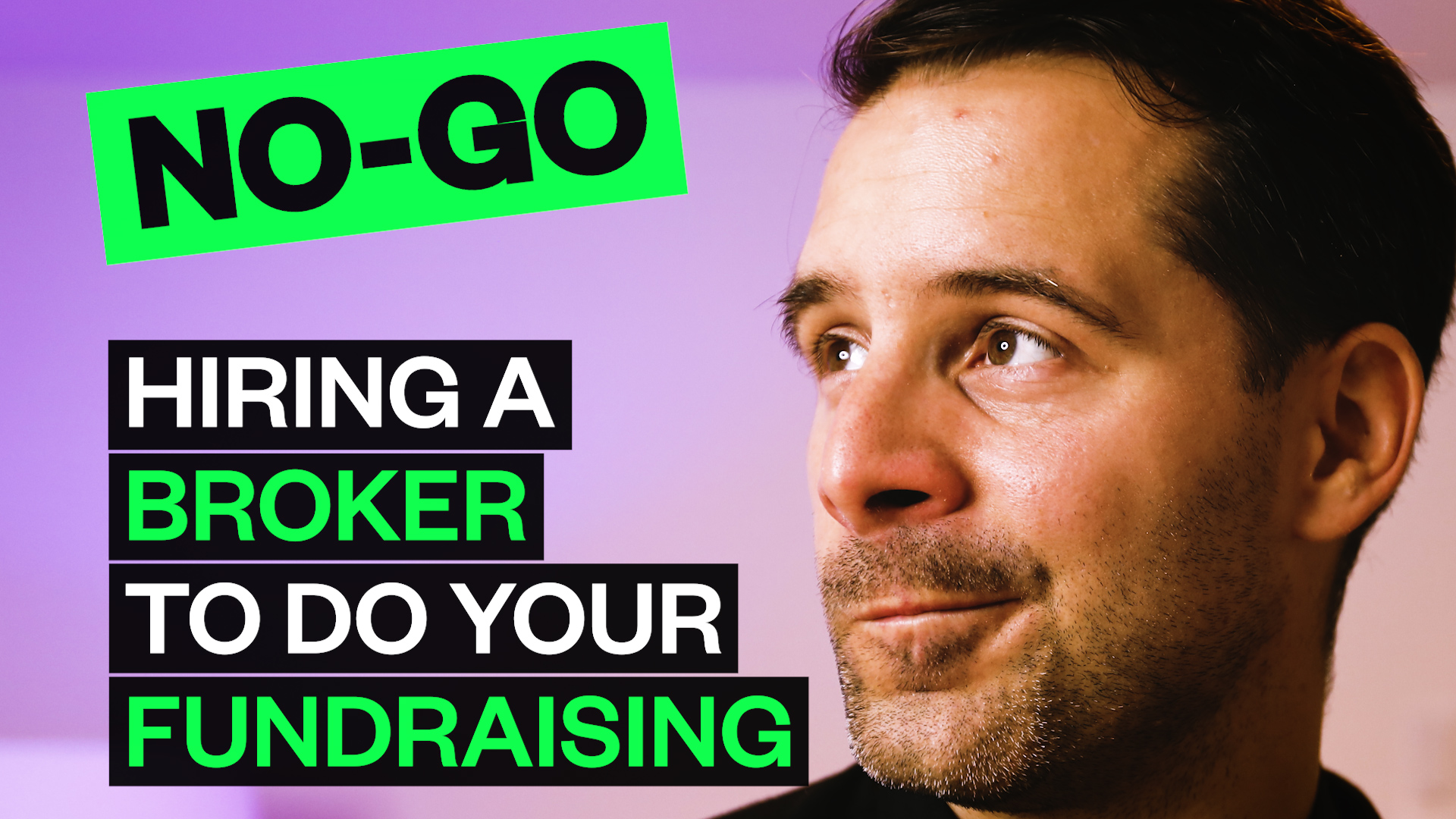 We understand the temptation to outsource your fundraising to a broker. Especially if you’re new to it. You might see fundraising as a necessary evil, something that you just have to get done. And so when you get an email from someone that offers to be able to raise millions of dollars for your startup and a minimal percentage fee, I understand how you might be inclined to reply. Unfortunately it’s a big red flag for us – investors and I want to shine some light on why that’s the case in this video.

Hey. Recently, I spoke about frustrating situations regarding NDAs and how we, as early-stage investors, will probably not even answer you. It is certainly not seen as a positive if you ask us for an NDA when you’re racing for your startup.

I’ve gotten a lot of good comments; among them was a question which was what other rookie mistakes could I avoid when I’m approaching you. And I want to point out one other red flag for us as investors, which is if instead of you as the founder approaching us, you said someone else to do the fundraising for you: brokers, people that help you with fundraising. Now, I understand the temptation to use someone for fundraising, especially if you’re new to this; you might see fundraising as something that is kind of a necessary evil, something that you have to do, even though you don’t really like to do it. And so once you get an email from someone that offers to be able to raise millions of dollars for your startup and a very small percentage fee, I understand how you might entertain the thought of replying to them and working with them in order to build a relationship.

Well, the reality is this, as soon as you engage someone that helps you fundraise, that’s not part of your company: so it’s not your CFO, it’s not the co-founder that manages investor relationships, we’re not going to invest in you. Why?

Well, for one, investing into you, and you accepting our investment, it’s like entering into a marriage. It’s going to be a partnership that’s going to be here for the next, at least one decade, if not more. And so it’s important for the two of us to build a relationship before we enter into this marriage.

So for us, it’s very important that you take the time personally to build that relationship with us. And as we go forward after the first couple of chats with you, we will do the same, and we want to build the same relationship with your co-founders because we do believe that we’re going to be partners for the next ten years. We both deserve to have a direct channel and not go through some third party intermediary.

Second, these brokers have different incentives than you have. Your incentive is to get that one investor with the best background, the most relevant experience. And the best profile for your specific startup on board, while a broker incentivized by the commission that they’re going to get based on the amount that they raise for you is just incentivized by the money that’s gonna be invested. So they don’t have good interest in bringing the right people to you, they will not go the extra mile to find that great investor, they will only go the easy route to find the most money they can early on.

And that doesn’t lead to a good relationship long term. And for us, even if we spoke directly, and we might already have committed to investing as part of this round if we understand that part of the round is being raised through some third party broker. It’s going to be a big no-no for us, and we’re most likely going to be out unless there’s a very good reason for it.

On top of that, their commission might be anything between half a percent and 5%, depending on whom you talk to, and what kind of model they follow. Now, while on a percentage point level, that might not sound like a whole lot, it’s important for us that every single dollar goes towards your startup, there’s going to be legal fees that are going to eat up a few percentages of the round every time. And so we care a lot about the remainder of the investment fully going towards the future of your startup.

How to approach fundraising for the first time

Now I’ll cover in future videos, a few tricks on how to approach fundraising for the first time if you’re just starting out, but just remember this from this video, it’s your job to do fundraising. You can, of course, consult with mentors. And ideally, you already have investors that have the experience that can guide you through this process but do not work with a third party broker.

So, in summary, why will we not invest if you’re using a broker to fundraise? Number one, we want to build a relationship with you; it’s the two of us that are going to be working together for the next ten years since there’s no room for a third party to play the telephone game between the two of us.

And then number three, because we want all the money that we put into this round to go towards the future of your company, and not into the pockets of some third party.

And with that, have a beautiful day. Stay curious. I’ll talk to you soon.