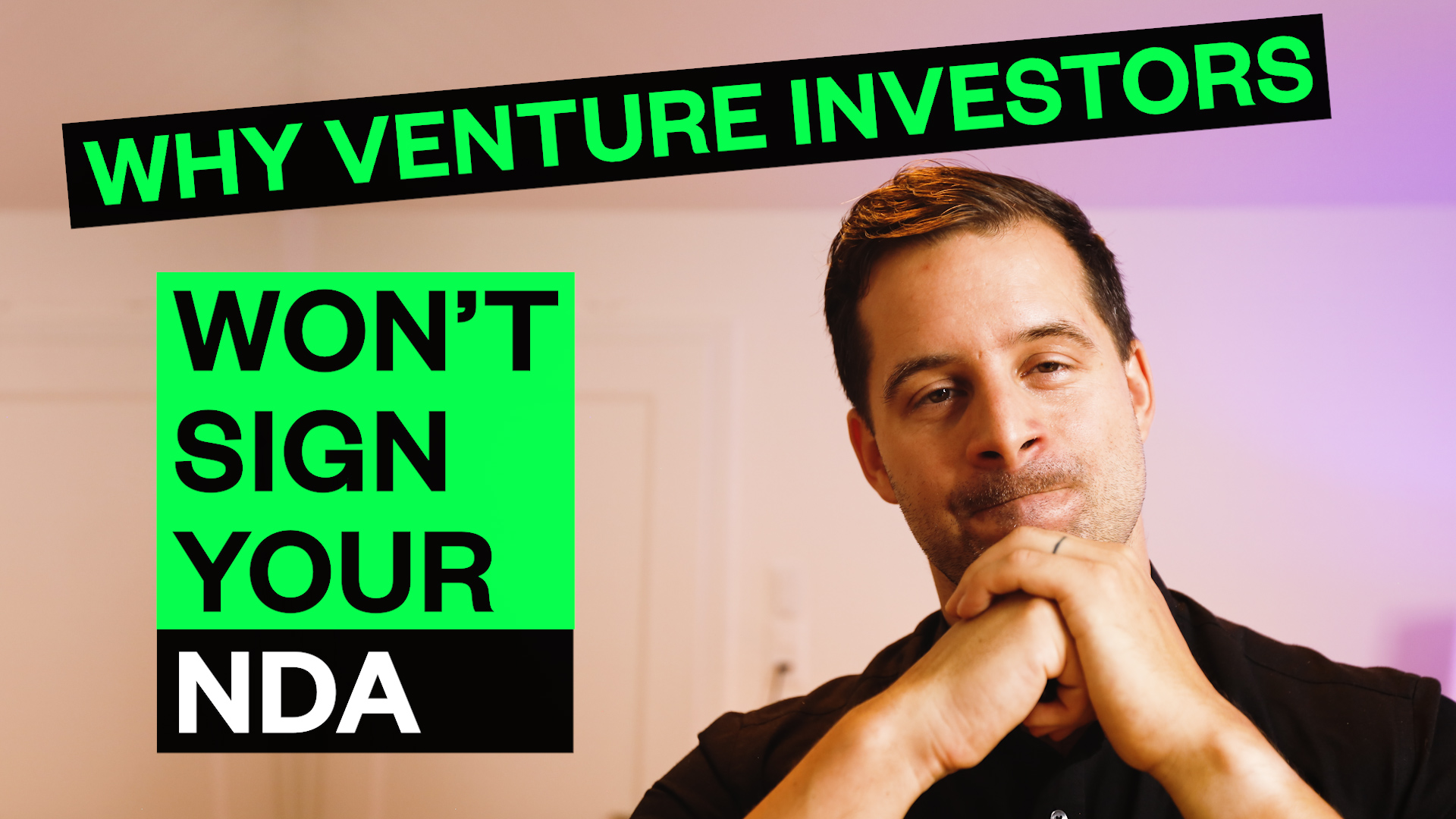 I understand that when you’re just starting out, you may think that your idea is your biggest asset and you’re inclined to protect it. As investors we see lots of ideas and 99% of them never get off the ground. The real asset is your team and the traction you’ve built. We can’t do our job if you ask us to sign an NDA – check out the video to find out why.

Hey, everyone. I just got off a call with a founder, and to be very honest, I think we left in a situation that was a bit frustrating for both of us. They asked me to sign an NDA, a non-disclosure agreement. And since that’s something that we don’t do, we couldn’t really talk much about their actual startup idea.

When to request an NDA

Now, normally when startups ask us to sign an NDA via email before we got on a call, for the most part, I tried to explain why we don’t do that. But to be honest, it’s often a very dark red flag, because it just shows that founders are very inexperienced. But I do understand that there’s not a lot of educational material out there that covers these questions. So I wanted to give you a bit of insight into this video as to why startup investors typically do not sign an NDA.

Maybe to preface this, I do understand that there are areas where investors might sign an NDA typically at a later stage when there’s a lot of financials, a lot of numbers. And if there’s a situation where an investor might have a conflict of interest because they’re invested in another startup in a similar space already. Also, when it comes to selling the company later on, and potentially strategic buyer buying the company or some of the assets, I totally understand why NDAs are needed.

And last but not least, what I’m saying mostly applies to software and hardware startups. I can’t say a lot about how things are in regard to life science or Biomed or any other startup that is in an area that I just truly do not know a lot about. I can see how, if there are patterns involved and stuff like that, that NDAs do have value, but they do not have value when it comes to early-stage technology, software investments.

Okay, so here’s why we, as early-stage technology investors, do not sign NDAs. Well, for one, we couldn’t really do our job. Our job is to see a lot of ideas and a lot of teams early on and only invest in a very, very small fraction. If we were to sign an NDA with every single startup that we just meet and that pitches to us very soon, we could not speak to the next 5, 10, or 15 teams that work on an idea in the same space, even if we haven’t invested in that first company that we signed an NDA for.

So by asking us to sign an NDA, you basically make our job impossible because you’re keeping us from talking to other startups in the same space.

And second, you don’t have anything that can be protected with an NDA. Typically, at that point, when you approach that pre-seed or seed, all you’re going to have is an idea, maybe some early prototypes, and a team. Now, the team and your prototype, no one can take that from you. If you’re building a sound culture, if you are creating a great foundation for your team, no one’s going to be able to take that from you. Same with the prototype that’s what you’re building, no one else would just copy that.

How to protect your idea

As for the idea, what we see is that a lot of inexperienced founders think that the idea makes up a lot of value. It doesn’t, the idea it’s worthless. You have seen hundreds of ride-sharing apps and a similar model to Airbnb before Airbnb and Uber. And none of these ideas have succeeded because it’s all about the execution. It’s all about your team. And you’re responsible for keeping that team together.

And then number three, and maybe this is more of a personal idea, but there’s already enough documents involved in making an investment, in getting an investment. We don’t need more legal documents to make our lives harder. Let’s focus on bringing value to your idea and your team instead of involving more and more lawyers.

Now, we will never sign an NDA if you approach us, no matter how persistent you are. In fact, the more persistent you are, the more you’re going to drive us away. Typically, if we can sense that you’re not going to move, we’re just going to be handed off, and we’ll tell you to come back whenever you’ve changed your mind.

But of course, you can also do some things to protect yourself without an NDA if you feel that investors might not have the best intentions in mind. For example, if you see that the investor you’re approaching is already invested in a company that’s in very similar space to what you’re doing. And this other portfolio company could one day become a competitor? Well, it’s very easy. Just only share the information that you are comfortable sharing, keep it a bit more high level, while you build the relationship. And only if there’s very strong interest, move forward and share more. Chances are if they are a sound and very good investor, they will not make a second investment into the exact same business model. And so chances are, you’re gonna have a friendly interaction with them, but they will most probably decline pretty early on in the process, given that they would have a conflict of interest otherwise.

So to summarize this, if you’re only taking one thing away from this video, do not send NDAs to investors in your early fundraisers; we will not sign NDAs, and it’s a bit of an orange flag. And it might even be a red flag, depending on your background. If we think you should know that this is just not something you can do, we will most probably not even reply.

There are a few reasons why we act the way we do. Number one, you’re kind of making it hard for us to do our job if you try and protect everything that we see under NDA. Number two, there’s no much to protect anyway; usually, there’s a very early prototype and idea and the team, and you have much better ways to protect your team rather than writing legal documents. And that brings me to the third point, let’s not create more legal documentation early on, focus on execution, and not making things complicated from the start.

Of course, you want to protect yourself in certain cases, especially if you’re speaking with investors that have or might have investments in a space where it’s similar to where you’re operating. And the best advice I can give you for that scenario is to just share high-level information. First, build a relationship and see if there is some actual strong interest and then decide on a case by case basis how much information you want to share.

As I said at the beginning, there might be exceptions to the rule. For example, if you’re operating in another space where there’s a lot of patents, and it truly is something that needs to be protected, maybe NDAs are appropriate, as well as for later-stage investments when there are lots of financial data that gets shared if there’s lots of confidential information that you wouldn’t want a competitor to have insights into.

So hopefully, this gives you a bit of clarity, and it will help you avoid frustrating moments when you get on a call with your investor for the first time. Do not make this mistake. Do not ask for an ace.
And with that, have a beautiful day. Stay curious. I’ll talk to you soon.

How to Simplify Decision-Making
NO-GO: Hiring A Broker to Do Your Fundraising

Six Tips For Your Startup Board Meeting

Co-Founders 2/3: How Do You Split Equity Among Co-Founders?