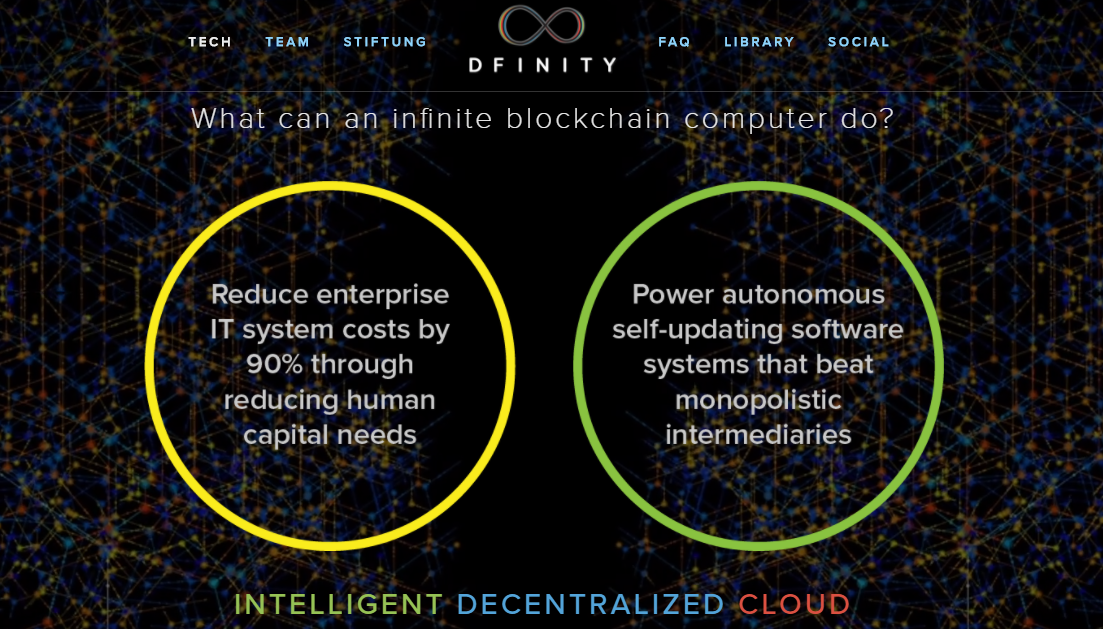 About a year ago I received a call from a previous co-worker. We had worked together at SumUp (the mobile payment startup headquartered in Berlin) and he had left not too long after me to focus on cryptocurrencies. I remember how we used my private laptop to mine Bitcoins and how it completely ruined the performance of my machine. This was 2012 and mining on laptops was still possible!

He called me and told me that he had recently joined a startup in Palo Alto, working on a new currency. He had previously worked on Ethereum and was now working on this new project called ‘DFINITY’. The company he was working for, called ‘String Labs’, was about to release DFINITY into the world through a Swiss Foundation and they were looking for someone who was knowledgeable in tech, business and – last but not least – Swiss.

They were looking to open a Swiss Foundation and were required to have at least one Swiss board member. The project sounded interesting and I decided to invest time to understand what it was about. I had spent quite a bit of time with cryptocurrencies in 2012 and 2013 but hadn’t spent much time looking into the space since then.

Getting to know the team

I got to know Dominic, who’s also on the board with me, and Tom, the two founders of String Labs. The team was about five people with a big vision – to create a currency that’s faster and more versatile than Ethereum but also had governance built in. Governance is non-trivial in a fully distributed system and requires a few new concepts that are not present in any existing currency.

I flew to San Francisco to meet the team and talk through the details in a couple days. We met in their Palo Alto hacker house and spent an intensive two days together to bring me up to speed. I went back to Switzerland, convinced that there is big potential and a lot to learn – for myself and the team.

How is DFINITY different from the other 300+ existing currencies?

There’s a plethora of currencies that are already live. So why work on a new one? DFINITY has these two main things that differentiate it from Ether, which is conceptually the closest. For one, it is faster and scales better – which allows the execution of not just ‘smart contracts’ (which are very simple pieces of code) but also longer-format code and eventually full apps. A term we use for this is ‘DAPPS’ – distributed apps.

The other key differentiator is the governance which allows users to launch petitions and vote on reversals of transactions and freezing some accounts. Other than Ether, DFINITY will not require hard forks to correct for things like the DAO hack. Users are able to launch petitions and get tokens to vote on these. This way, transactions that are clearly bad for the network – hacks, transactions originating in weapons trade or other illegal activities, can be frozen or reversed. This by far reduces the likelihood for bad guys to even bother choosing DFINITY for their activities. Z-Cash, Bitcoin or other currencies that offer no irreversibility are far safer and final and will likely remain the places where these trades happen.

Both of these features are in favor of businesses. That’s why Boston Consulting Group Digital Ventures (BCG DV) decided to partner with us to launch the DFINITY technology with their clients.

Where are we now

DFINITY has raised their seed round last February. We raised a total of 3.9M CHF equivalent in just over 24 hours. We have since been very busy scaling out our team and starting the implementation. We’re expecting to release the first version of our network this fall, ahead of our main fundraising round. We have team members in Japan, the UK, Switzerland, Italy, Germany, and the US. We are constantly looking for people who are interested and motivated to participate in a fast-paced blockchain startup. If this sounds like a welcome challenge for you, don’t hesitate to reach out to us: cedric.waldburger@dfinity.org.

What Does Glimpse Do?
3 Podcasts You Might Not Know About Yet

How We Came Up With The Idea For Sendtask

Which ICOs Can Be Trusted?

Geography: Where do I invest?