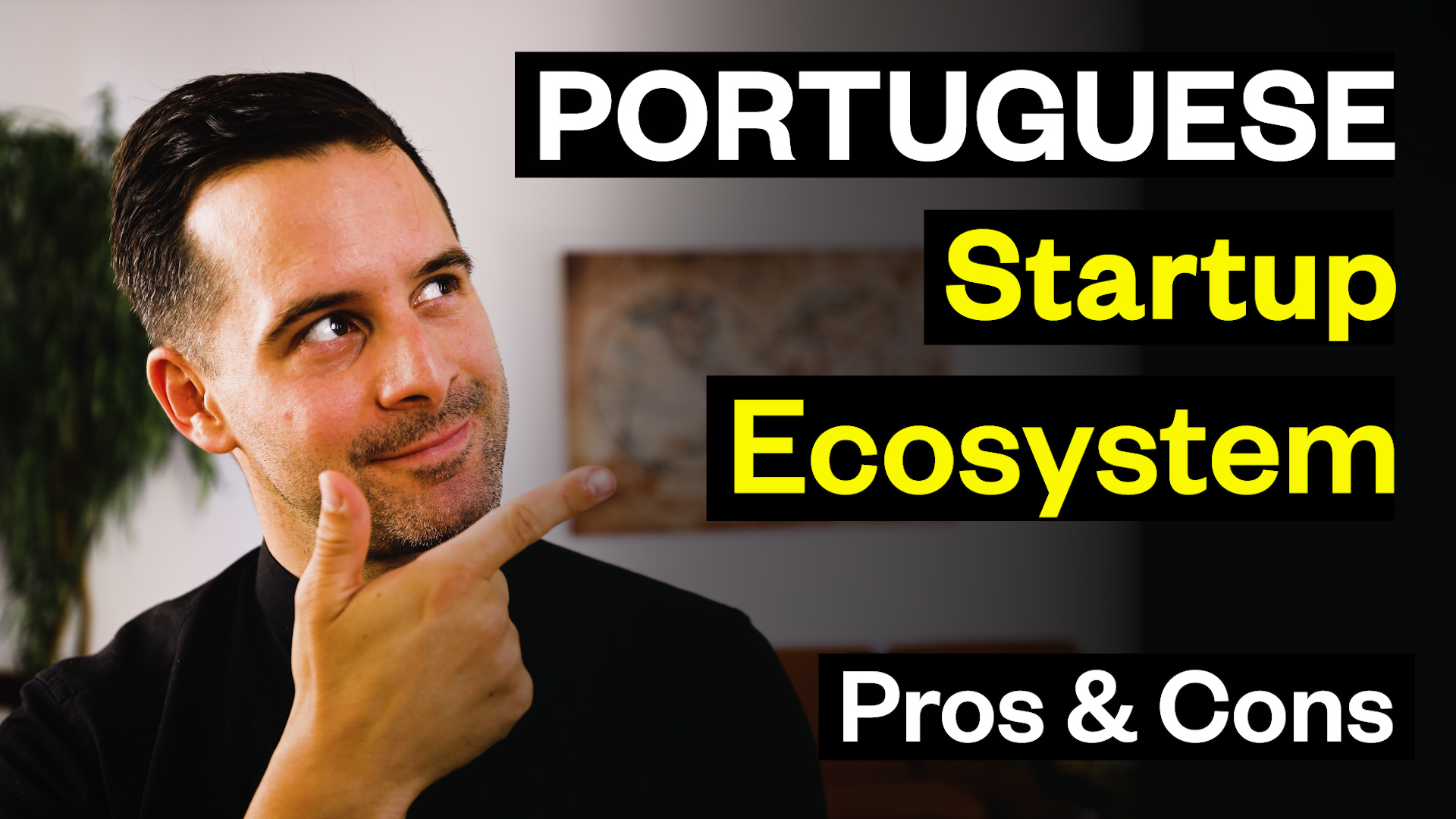 I’m a big fan of Portugal, its’ breathtaking views, tasty cuisine and easy way of life. So much, that Elena and I decided to get married here last year. This year, we came back to get to know and understand the startup ecosystem in Portugal better. I spent 4 weeks meeting up with entrepreneurs, VC funds, angel investors, accelerators, company builders and other players in the ecosystem. Here are my top 5 pros and cons to start a company in Portugal or make an investment in a Portuguese startup.

Hey, everyone, it’s been a few days and Elena, and I have come to Lisbon. We’ve been here enjoying the good food and meeting lots of people along with the good weather for the past few days.

A good ecosystem for startups

Today, I just want to mention a few things. Why we’ve come here and why I think Lisbon or Portugal, in general, is such a good ecosystem for startups. Right now we are spending four weeks of our summer here with the intent to both take a bit of time off and enjoy the good weather and the good food as well as get to know the ecosystem here a bit better because I do believe that Portugal right now offers a lot of incentives for startups and founders to come here and to thrive. I believe that in the next few years, we’ll see a lot of big companies come out of Portugal. And that’s why we want to make sure we spend a bit of time with the ecosystem here and get connected.

Living here is kind of nice

So what are those incentives? Well, it starts with what I’ve already mentioned two or three times because it’s so good, there’s good food, there’s great weather for most of the year, fairly warm. It’s close to the water, great scenery, great lights, So living here is kind of nice.

ROI on your living expenses

Then second, I think the ROI on your living expenses are great. Portugal is still reasonably cheaper, at least good bang for your buck. Here in Lisbon, a bit less so than when you move outside of Lisbon, for example, up in Braga or Porto, things are even a bit cheaper down here. But even here, I would say you’re paying less for a good meal or for a night out than you will be paying in Berlin, and you get much better weather.

Number three, and this is where it becomes a bit more startup specific. It’s fairly easy to get someone to move here and set up here, to get a work visa. So politically, the system is set up in a way right now where it does allow for good talent to come in and start work here.

Number four is a program called 200 M. 200 M is a government fund that matches local funding into startups. So let’s say Tomahawk.VC or even a local investor here decides to invest in a startup that’s based in Portugal, and then the government will match that funding one to one, so if we invest 500 k, the government will invest 500 k as well. And they give me as the outside investor an option to take over their stake for the next two or four years depending on the startup the area that they’re in, and so on and so forth but for a very reasonable interest rate. So that basically means for me, as an investor, I can come in, I can invest, and then two or three or four years down the road, I can double down on my stake, and I can double my commitment for a very little cost, which is something that’s great and very attractive for investors. And if it’s attractive for investors, that means it’s also great for startups, because it’s easier to raise bigger rounds here.

And then last but not least, the fifth factor why I think it’s great to build your startup here is that there’s quite a bit of talent being brought out of Portuguese universities as well. They have two big technical universities between Braga and Porto. And then there’s also a very well known Technical University near Lisbon. So that’s three technical universities basically within three hours of driving off each other. So there’s a lot of talent that is available here for you to build your startup with.

Are there downsides? Of course, there are downsides as well. Number one, Portugal is a very small country, there’s only a population of about 10 million. The upside that I see in that is that there’s always a lot of incentive to think bigger than your home market, something that startups in Switzerland need to learn quickly as well, where the market is even smaller and more fragmented. But even with 10 million, that’s not a big market. So clever founders realize that they build their MVP here, they test their product, but then they don’t try to perfect their product-market fit here. But instead, they try to move out and go into a different market quickly.

Second, there are not a lot of funds locally, right now, there’s probably three or four bigger venture funds and an equal amount of angel groups. So raising capital from local investors doesn’t give you too much choice. It’s a fairly small ecosystem. But like us, like Tomahawk.VC, there are lots of funds from the outside now looking at Portugal, especially Lisbon, and creating more regular touchpoints. So that shouldn’t be an issue going forward.

One question that I’ve had for a lot of people that I met in the ecosystem here is the next natural market for anyone growing their startup in Portugal. Is that Brazil? Or is it Spain? Spain being its neighboring and Brazil being a huge market that’s far away, but shares the same language. And from what I’ve understood so far, most companies here, when they grow past Portugal, they would rather expand to Europe, including Spain, instead of crossing the Atlantic and going into Brazil, just because the cultural gap is too big between those two countries.

But if you have any insights, please do let me know in the comments. To quickly summarize, I think there are lots of factors that speak for Portugal as the place where you want to build your next technology startup. We are definitely going to spend more time here. We’re very interested in this market. We’re going to keep networking with everyone that’s based here, and we’re going to look into how we can partner with the local ecosystem.

If you have any ideas for us where to look next, other areas in Europe, or elsewhere in a world that you think are perfectly positioned to bring out great companies in the future, please let me know in the comments, and with that, have a beautiful day. Stay curious, and I’ll talk to you soon.

How Does a Venture Capitalist Make Money?
Email intros 101: Connecting people with a professional introduction email

Why am I in Japan? | Cédric Waldburger

Tomahawk.VC: The companies we look for