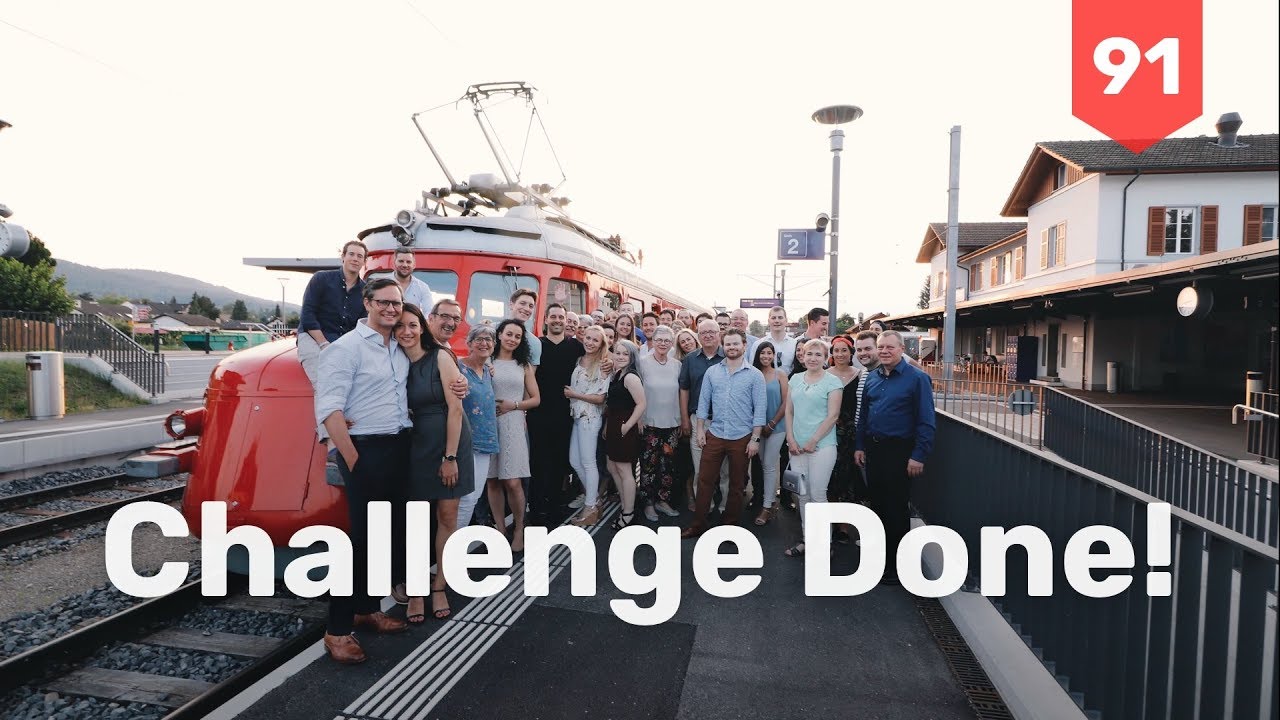 Everything worked out today – I got to spend the afternoon with my friends and loved ones from near and far. It was a surprise and we started at the old tower of Zürich airport with drinks and snacks. Then we went on a historic train which took us up north to the largest waterfall in Europe. We ended the night with drinks. I couldn’t have wished for a better last episode. This vlogging challenge has been a lot of fun, countless hours of footage and over 1.5 TB of data. Thank you all for your feedback, comments, and ideas for improvements! Stay tuned for what’s next!

Alright, today is day number 91 of the vlogging challenge. And it’s also the day where I’m celebrating my 30th birthday. A few friends coming in from all over the world. So I’m headed to Zurich to meet some of them and then later today we are gonna meet at Zurich Airport at 4:30. And no one knows what we’re doing. Fabian and I planned the whole thing so should be a very exciting day. I’ll try to share some of my takeaways from the vlogging challenge and capture some of the event. And I hope you enjoy this episode number 91!

So I made it to Zurich. Gonna meet with Johannes. Johannes drove from Frankfurt into Zurich. We’re gonna pick up a Transporter for the next few days to carry around people. Then it’s off to the fun stuff! Then we’re gonna go back to Zurich and see if we can meet everyone who’s flying in today and just have a good time!

So far no one has managed to find out what we’re doing tonight so I’m excited to see how they react. I’m a bit worried that everyone expects some super spectacular things to happen where actually we’re just gonna have a really nice time hopefully. Let’s see.

On our way to Zurich

Johannes and I – we just got a bunch of stuff done for the E under 30 event that’s starting tomorrow. And now we’re on the way to Zurich. I’m super excited. Quite a few people have already landed. Some are still in the air and should land soon. And with that, it’s a go for the birthday party.

So most people seem to be with jet lag and had to sleep so we’re just gonna have a couple drinks in the sun and then get ready.

We’ve had a few drinks. A few people are already here, some went to nap a bit. And now it’s go time! Now we’re headed to the airport to celebrate and spend some time together.

Meeting everyone in a very special place

Thank you all for being here! It’s been seven weeks since I’ve had my run-in with destiny. I had a car crash and I’m even more grateful now to spend today with all of you and create some memories.

Fabian helped me plan this whole event. At some point, we came across this room which is the old tower of Zurich Airport. There’s also a second floor which we can go check out. I really like the idea of starting the day here because of how symbolic it is for me. Not because I fly a lot but because travel has become my life. And very often I’m asked where is home for me.

What I’ve realized over the last few years is that home for me is not sleeping in the same bed every night or going through the same entry and door every night. It’s about spending time with people that I love and want to create memories with. And with that, I thank you all for coming here. It’s amazing that a lot of you have traveled from far or have taken the day off and made sure you can be here today so thank you all for being here and spending the day with me!

So first of all, we’re gonna leave at about 6:10. If you see a Turkish airline plane landing, that’s gonna be Levi. He’s coming in from Miami. He had an earlier flight booked but he had a bit of a stressful day yesterday and went to the wrong airport.

Birthday wishes and one memorable ride on a historic train

I’m feeling great! I get to spend time with my all my loved ones. I’m excited to see this train because I’ve never been on that train either.

“Hi Cédric, really excited to be here. Thank you for having me and happy birthday!”

“Dear Cédric – right, in the cabin with our driver – hi, Peter! Papi is here. Thank you so much for having us today. We wish you for the next 10 years as many exciting adventures as you had in the last 10.”

“Have a phenomenal, wonderful, fantastic, amazing 30th birthday! Half of our lives Cédric – we crushed it! And this is only part 2, there’s part 3 coming! Who knows that part 3 is coming? I believe history at this point in time. New York says “hello”!”

“We’re having a great time! We love you all!”

“Thank you for everything!”

A big Thanks to everyone who helped along the way

This is the morning after. Slept in Zurich and I’m just about to get up for another under 30 experience.

Yesterday was overwhelming. I really enjoyed seeing all my loved ones, all my friends. It was great that so many people could make it and even Levi who missed his first flight, went to another airport, got another flight, went through Istanbul from Miami and caught up with us halfway was there for a train ride home. So many things worked out yesterday, I’m grateful for that. The weather was beautiful and everyone was there. I felt like everyone had a good time. Thank you all for coming!

So yesterday also concluded or formally concluded, the end of the 91-day vlogging experiment. I made it my goal to produce an episode every single day from March 1st till June 30th. It was an incredibly great time. I think I’ve learned a lot about storytelling. I’ve had a lot of fun with these videos. It’s also such a nice way of journaling. I’ve never really stuck to journaling and writing but this way it’s a really cool way for me to look back and see what’s all the cool stuff, the memories that I’ve created, the people that I’ve met, the stuff that I’ve worked on, the thinking that I’ve went through in the last 90 days or 91 days.

I think we’ve produced over 200 hours of footage. Looking back at the vlogging experiment – those 90 days were pretty incredible. A good way for me to get stuff out of my head and bring it, get in front of you and get feedback. I’ve really enjoyed that, I’ve really enjoyed comments, I’ve really enjoyed people challenging me, challenging my ideas, criticising me or being… giving me support and telling me to keep looking into something or a keep working on a thought experiment. So thank you all who contributed to this experiment in one way or another. Whether it was a like, a share, comment or just an offline remark that you’ve made to me and the discussion that we’ve had.

On the other hand, I think I’m gonna take probably a couple days off from filming. Walking around with this camera all day every day… You know, also talking to his camera – that was not natural to me at all. And I’m kind of looking forward to just spending a bit time off of the camera. But I’m probably gonna continue with some sort of video experiment. Now I haven’t formalized it yet, I’m not quite ready to announce it just yet but you will definitely see more of me.

Thank you guys all for watching this. I’ve had an incredibly great time yesterday. I’m looking forward to today and heading out with the E under 30 group. And with that, I might not talk to you tomorrow but I’ll talk to you soon. Cheers!

[Podcast] The “How” And “Why” Of Distributed Living

Will I ever travel again?