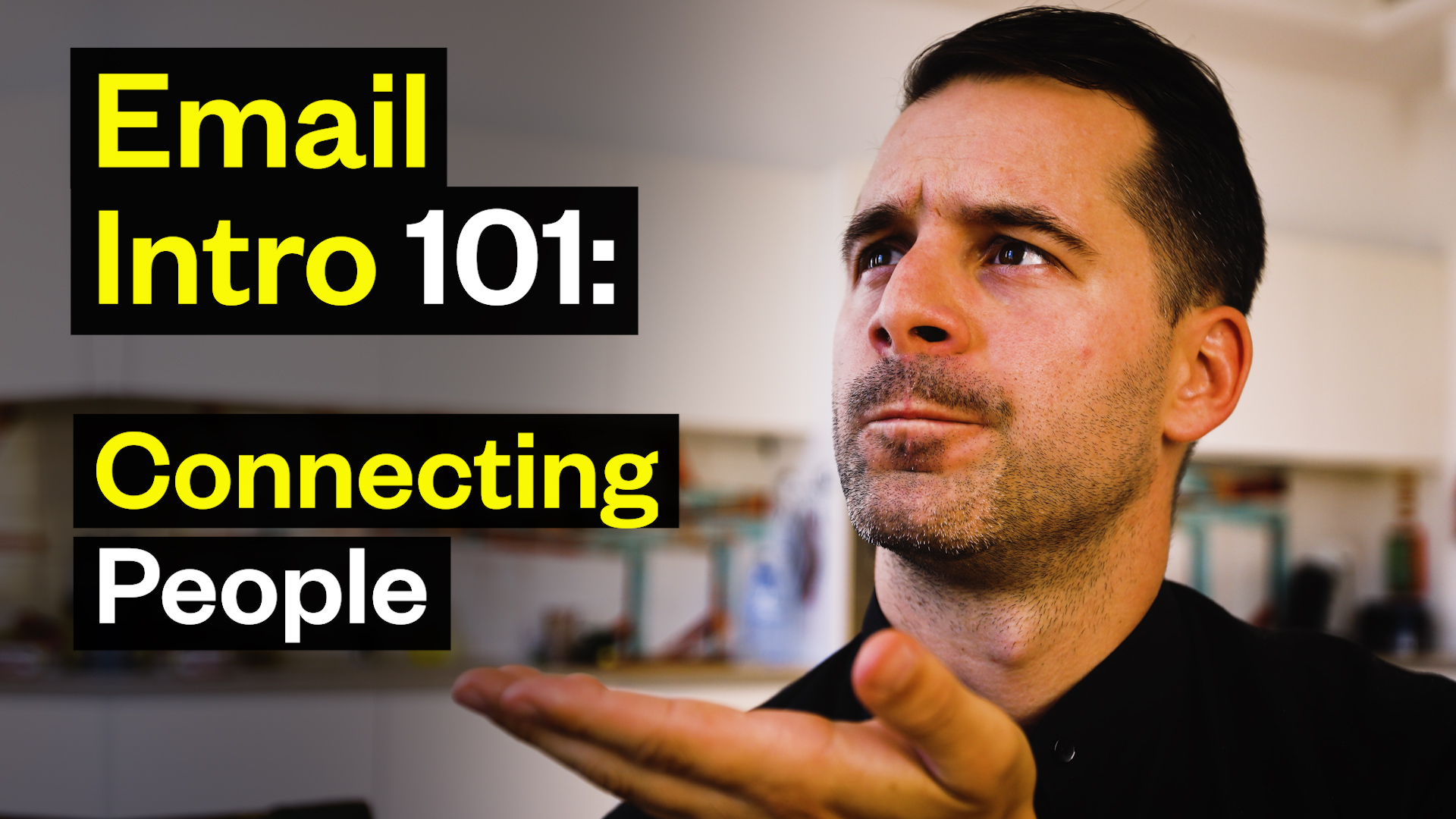 Hey, I’m about to finish yet another workday here in Lisbon. And I just wanted to share a few tips about how to intro people. Introducing people and creating a connection between different companies and different people is a big part of my job. And probably anyone’s job that works in a growing thriving tech company or as an investor.

We, of course, always connect our portfolio companies with people that we meet and think they could provide value to or could get value from. But then more generally, anyone in the space that we know, we like to connect with people that we think could be helpful, vice versa.

How to connect people?

There are a few things that you want to avoid and a few things that you want to keep in mind when you connect people. For example, I like to get to the point very quickly, and I like to send an email to both people giving them just enough background, so they have something to talk about without taking any of their conversations away. In a very simple example: I just connected my friend Roberto who runs Subvisual, a venture builder, and UI/ UX agency further up in Braga. We have another friend of mine, Teo, who has a company that’s based between Lisbon, Zurich, and the US. And they are currently looking for additional developers as well as potentially raising funds in the future or more UI and UX expertise. And so I thought both of them should probably talk to one another.

Example of subject line for an intro email

And so here’s a concrete example of how I would do this, I would send an email where both of them are in the to field. In the subject line, I would write something like: Intro Roberto, Subvisual, <> Theo, Oto.ai, which is his company.

That part usually everyone gets right. One thing that I see often goes wrong is that email is either too short or too long. So it could be too short if someone sent me an intro where it just says you guys should talk to one another… because that doesn’t really give me an idea of why should we talk to each other, what is the value that I can either provide or get from the other side, person. And that’s important because there might be someone better in my organization. If this is about a potential hire, then I would forward this to the person hiring people in my company, or if it’s about fundraising, that it’s a different person that needs to speak to the person I’m introed to.

It could also be too long. If someone writes several paragraphs and gives me all the background and basically tells me you should hire this person. That’s definitely not what this should look like. Because then they’re taking something away from me, they’re taking my decision away. And now I’m kind of in this awkward situation where if I do respond, I almost have to go with the storyline that’s already been created. Whereas I’d like to just have an open-minded, look and talk to someone.

It’s a bit of an art to finding the right middle ground. For me usually, it’s a couple of paragraphs, in this case, something that I would say is, “Hey, Roberto, please meet my friend Teo. He has a startup named Oto.ai. That’s based between Zurich, Lisbon, and New York. He recently decided to become a permanent resident in Lisbon and spend a lot more time here, and he’s looking for UI and UX expertise to grow his team, as well as to connect more with the local ecosystem.”
And then, “Hey, Teo, please meet my friends, Roberto, he runs Subvisual, which is a UI and UX agency up in Braga. He’s an angel investor in several companies in Portugal. He’s definitely very knowledgeable when it comes to the landscape for startups here in Portugal”.

“Over to you both, Cedric,”. And that’s the message that I send-off. Both of them have a bit of context. And now, one of them will reply, and the behavior that I expect is that I get BCCed on the first email. So I’ve made the intro. I don’t need to stay on the email train. But it’s good to let me know that you have gotten in touch. So typically, let’s say I was one of those two parties and I get the message, I would then say reply to all, but I’ve moved myself to BCC, and I would say, “Cedric, thanks for connecting us. I’ve moved to BCC to save your inbox,” doesn’t actually need that much text, but just something along those lines.

And then you can say, “Hey, Roberto, Pleasure to meet you. Lalalalala”, so very short and sweet. When you do connect to people, give both of them a bit of background, give them something to talk about. But don’t take anything away from their storyline; don’t make any decisions for them. Make it easy for them to connect without giving them a clear path forward. And then if you do receive an intro, if you do get connected to someone, make sure you let the person I’ve connected you know, by copying them on the first email, BCC-ing them and then take over and make sure you move the conversation forward on a one to one channel.

Right. And that’s all for today. One thing that I’m curious about is what kind of emails do you struggle with? What kind of emails are you proud of? What kind of processes around email have you developed over the years? Please let me know in the comments. I’m always curious because it’s a tool that we all spend so much time with that I want to become really good at.

And with that, have a beautiful day, stay curious, and I will talk to you soon.

Portuguese startup ecosystem: Pros & cons for investors & founders
Dos and don’ts for the first call with your potential investor

Sendtask Team Retreat in Berlin – Recap and Takeaways for Your Team

Help Me! Transparency Is Important