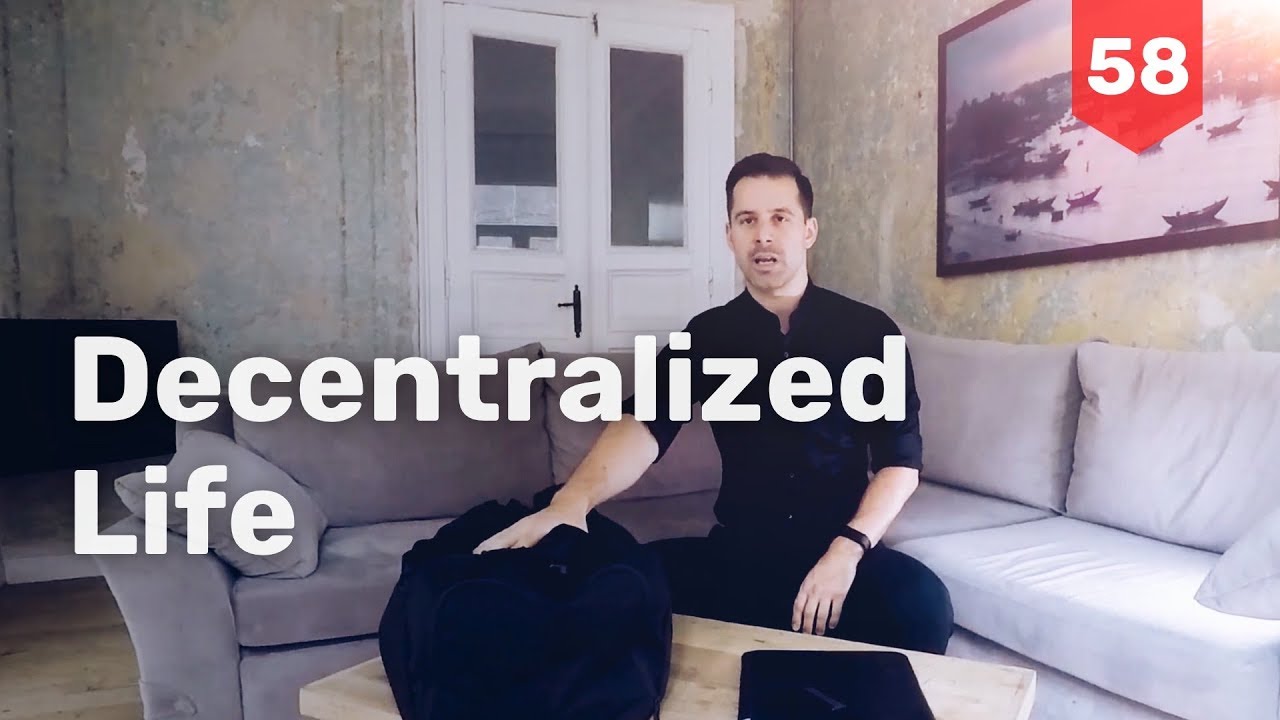 I’ve been living a very decentralized life in many private and professional areas of my everyday. I’m often asked why I travel so frequently and why I’ve decided to give up on having a constant home for over two years now. Also, Decentralization as a technology has been fascinating me for more than six years now. So much that finally, I’ve decided to centralize my attention to just one project: DFINITY. This episode is the long-overdue intro to why I currently live the life I do!

Hi, my name is Cedric and I have a very decentralized life.

So much that for the last two years I have not even had an apartment or a home. If you had to describe my life in numbers, these would be some of the numbers that would stick out.

My life in numbers

First, I only own 64 things – this is everything that I own. Second, last year I’ve been on 120 flights which leaves me with less than three and a half days in the same location. So I’m constantly moving around the globe. If you counted the distance that all my flights covered last year, it will get me 80% of the distance between Earth and the Moon. And last but not least – 15. 15 is the number of projects that I’m currently involved with. Startups or later stage companies that I’ve either started or joined very early on.

Why I live this way

You might ask “why”? Why live such a crazy life? Why not have a home, why not have a fixed place that you can call home and go back to every night? The short answer is it’s because it enables me to do what I love. I love learning and I’ll talk a bit later about how I’ve discovered that but… I love learning about this process of going from an idea that I had at the bar last night to something that does 1 million.

This phrase from 0 to 1 million is what really fascinates me and that’s why I’ve organized everything in my life to expose myself to as many opportunities as possible to learn about this process.

This all started almost 10 years ago. I was born and raised in Switzerland. After I had completed my bachelor’s degree in electrical engineering, I first moved away from Switzerland to work in a startup in New York.

Now, at that point, I had already started a couple companies. Some of them were doing well, others were doing not so well and were just an experiment and a learning curve. But I had already discovered that I really like tech startups.

So I moved to New York and I was completely fascinated with the number of new experiences that I was exposed to and the number of smart people that I have met. And that’s when it became really clear to me that I need to be able to travel and move around frequently in order constantly expose myself to new people, new projects, and new experiences.

Now, I’ve always been technical. I’ve always been fascinated by the combination of cutting-edge technology and economics, psychology… Or just more generally speaking, the impact that technology can have on our lives. I think what drives me in life beyond learning is working on stuff that makes the lives better of millions of people.

And so I’ve always exposed myself to technology companies. Starting with social networks, payment processors, and a few more startups. Until about four years ago when I had an opportunity to become an investor and scale my time across different companies.

So I started not only being active in a company but I was also able to invest in companies and help companies grow simultaneously. And I’ve done that for the past four years and I’ve invested in a number of companies, mostly in Central Europe and the US.

And at that point, I realized that my learning curve was flattening and I wanted to jump back into the driver seat and build companies myself. So 2014, 2015, 2016 was when blockchain really started to hit the mainstream. And I was fascinated by this new technology. The ability that it gives us to connect economics, psychology with cutting-edge technology was really fascinating to me. And the almost endless amount of possibilities that opened up.

The present: DFINITY and blockchain technology

About two years ago, I started contributing to DFINITY – a cutting-edge new blockchain technology.

I’m on my way back to the DFINITY office. Today is the first day that we’re bringing all the team members together and I’m just leaving San Francisco now. Sunset right there – beautiful.

I’m excited to see everyone and see where we’re going to take this project in the next few months.

I started working with Dominic Williams who’s the founder and who’s really the brain father of this project in Palo Alto. And I helped him and the team set up a Swiss foundation that can then drive forward the development and promotion of the DFINITY technology.

Over the years, I’ve had several roles at the company and I’m currently working as VP of Growth and helping establish the ecosystem. I’m helping developers find ways to launch projects on this new decentralized infrastructure. And I’m super excited to talk about and go through thought experiments of what this new technology makes possible for us.

What Is ‘Proof Of Stake’ And Why Is It Important?
Thoughts On Mentorship

Bootstrapping vs. Fundraising – How to be strategically smart about startup financing?

A Minimalist’s approach to investing