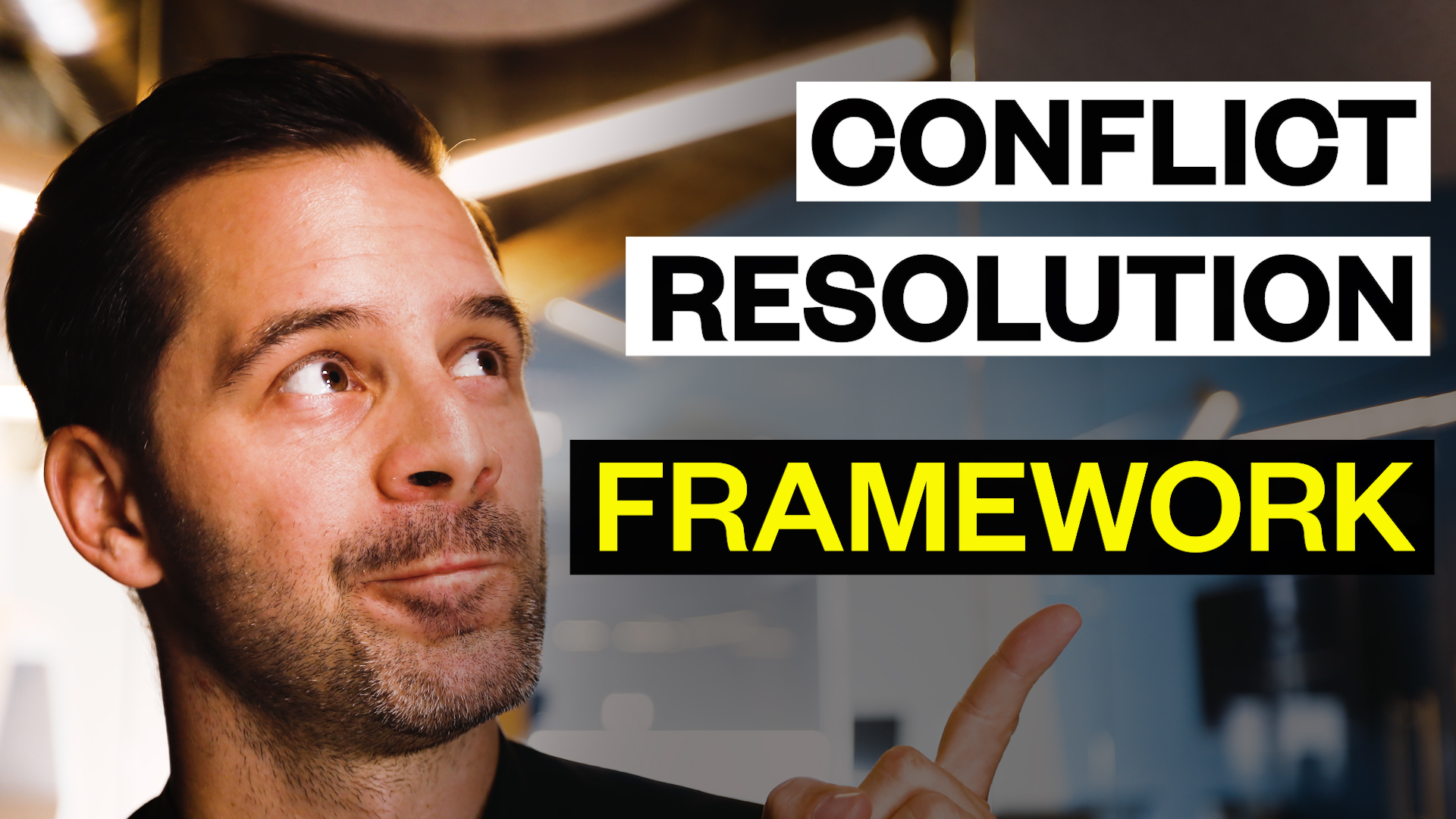 While conflicts are a big part of our lives, resolving them isn’t always. That’s why I tried to come up with a framework or strategy that will help me resolve conflicts effectively in even the most difficult situations. 10 years later, this strategy helped me and my friends resolve conflicts between team members, husband, and wife, brothers, and sisters, neighbors, and more. Let me know what you think about it!

What’s up, everybody? It’s already been in a week—time flies. Elena and I have been in Portugal for a week now. We’re working from a beautiful office here in Braga, which is a city about an hour from Porto.

Today, I quickly want to share a framework that’s been extremely helpful to me in the last ten years or so to resolve conflict early and quickly. Now, whether it’s in your personal life or in your professional lives, often, I think being successful means navigating conflicts quickly and successfully. Because conflicts can be anywhere, it’s important to have a framework that we can apply easily and quickly without much thinking.

Another reason why this framework is important is that I think now that most of us work remotely or have at least had some experience working from home or remotely in one way or the other. I think it’s important to overcommunicate in that setup because we don’t have the luxury of being in the office and getting a certain feel for one another. If someone is feeling frustrated or sad or any other emotion, it’s much harder to sense that over the distance.

So here’s the framework that I would like to share with you today, three Fs, facts, feelings, and future. To give you an example recently, I talked to a couple of founders who had recently raised money and announced it. Now in the press, only one founder was mentioned in the article because he was the one that had talked to journalists, and understandably, the other founder felt a bit unappreciated and was frustrated.

Now instead of being angry about that and staying frustrated and letting it grow inside him until at some point, it explodes. Here’s a better way to resolve that with a framework. Let’s look at the framework. Facts are the first F. When you communicate the conflict to whomever, you have that conflict with. First, talk about what is objectively true. In this case, the founder that felt left out could say, we recently raised money, you talked to journalists, and some articles were published about our fundraising, but I wasn’t mentioned in those articles. The reason why facts are important is to give a common foundation, something that’s established as a ground proof and also to talk about this concrete instance. What makes conflicts sometimes very hard to resolve is when we generalize them. So this founder could also have said, you never think of me when you talk to the press, or you don’t appreciate me enough, you never mentioned me when you talk to others, both of which will be much harder to respond to than what he chose in this case, which was talking about the specific instance.

So the second F is feelings. How does it look inside of me? What are my emotions, this founder could have said something along the lines of when this happens, what I just described to you, I felt left out I felt unappreciated and honestly I was also frustrated because I felt this had happened before?

Now, why is it important to choose this words because I want to give the person on the other side of the table, a clear idea of how it made me feel, what’s going on inside of me. Is might not always be obvious or might also have not been easy for another person to look inside of me. So it’s, it’s important to talk about it.

And now on to the third F. Future, I talked about how I’d like us to handle situations like this going forward in order to avoid frustration on either side and to avoid conflict. So the founder could have said something along the lines of when you talk to journalists in the future, it would be great if you run it by me before anything gets published. I would also appreciate it if you make sure I get included in one or the other article because it’s something that I value as well. Now, I said third party important because it gives the other party a clear way out of the conflict; they might not be aware that there was a conflict. And by giving them a clear way out of this situation, you give the whole situation a very positive spin.

Now that’s a very simple example. Of course, sometimes it’s hard to be very clear about our own feelings and what has caused what. But this framework has extremely helped me in the last ten years or so since I first heard of it and slightly adapted it for me, and I thought it might be helpful to some of you as well, especially during these times where some of us might be challenged by new work environments.

So just to quickly summarize three F, first facts, feelings, and then future, let me know how it goes. Let me know if this framework has been adding any value to you.
And with that, have a beautiful day. Stay curious, and I’ll talk to you soon.

Portugal: FIRST FLIGHT After COVID-19
How Does a Venture Capitalist Make Money?