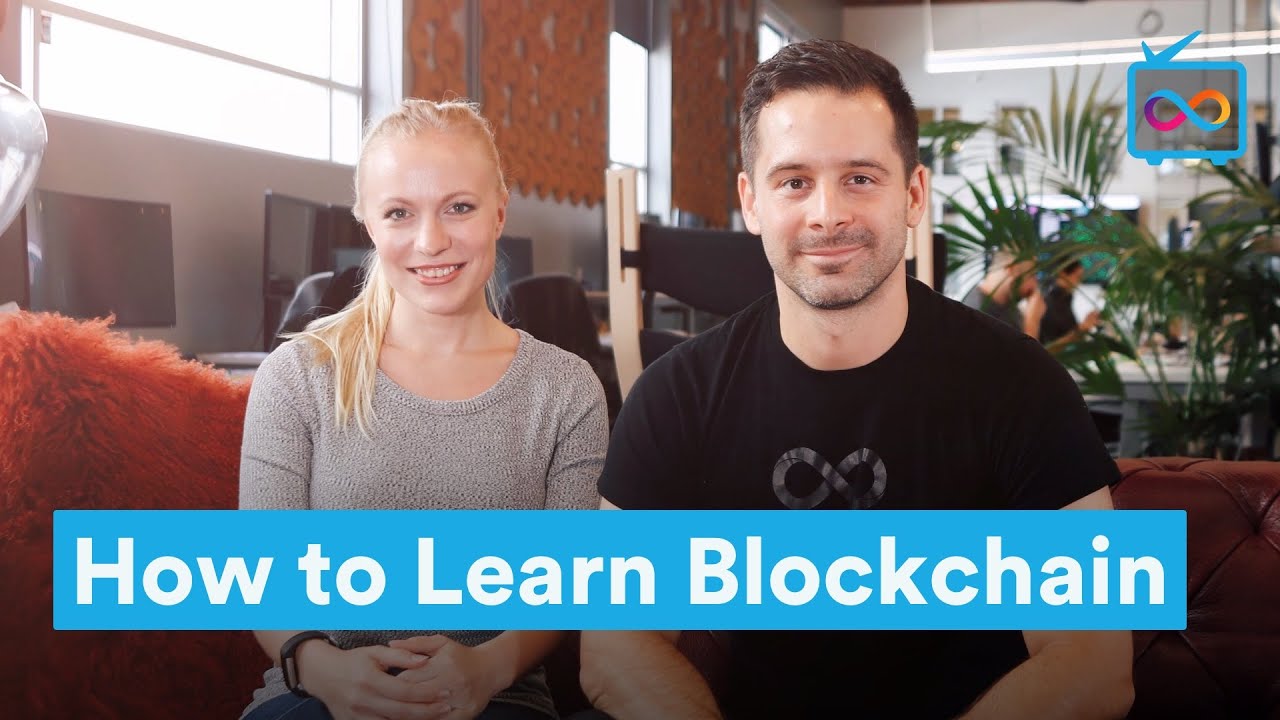 “How do I get started learning more about blockchain?” is one of the questions I hear most often. Elena spent a couple of weeks working from the DFINITY office and was inspired to learn more. In this video, we talk about how she approached it and what tools she used. Dive in if you’re also wondering how you can get started.

Welcome back to yet another episode of Inside DFINITY. Today we have a bit of a special set up – next to me is not any of DFINITY’s team members, but Elena. Elena is my girlfriend. She does not work in crypto, but I think we had a bit of an impact on her. She’s been working out of DFINITY office on her own stuff, but she’s definitely had a bit of a crypto influence over the past two weeks.

Elena usually works in SEO – Search Engine Optimization. So she helps companies to appear further up on the Google results list. But this week she cleared her calendar to educate herself on crypto. I wanted her to come out to the show and talk about her experience and how she progressed; what she looked at, what she learned in that time. Because I think it’s a common question that I get, “How can I get started and how do I find out what all these cryptic terms mean? How can I figure out what to make of all these 15 hundred different currencies that are currently listed on pages like CoinMarketCap. So maybe we’ll start with that.

Cédric: First of all, when did you first hear about crypto and blockchain?

Elena: I first heard about Bitcoin actually a while ago in 2012. I used some bitcoins for transaction but didn’t have any clue about the whole system, what it’s capable of, this whole new world of blockchain. I didn’t know anything about it and forgot about it later after the transaction. Then I started to get more into it through Cedric actually, when he started to talk about conferences, about DFINITY and I already felt that it’s a big thing. But still didn’t have any clue. Then, I started to ask people on how to get started on crypto; this was actually not very easy because no one could really give me an answer.

Cédric: I think it’s actually interesting that the first time you got in touch with Bitcoin was not because you were speculating or you were fascinated after technology, but you actually used it to buy something real.

How to Buy Bitcoins

Cédric: Do you remember how you bought those Bitcoins? How did you find your seller at the time because I think it was not through an exchange back then and it must have been peer-to-peer?

Elena: I actually googled for people who sold the bitcoins and, then, went to someone’s apartment and purchased my bitcoins actually there. I gave some money and in exchange he made the transaction.

Elena: What was funny about this is that when I was searching for people who sold bitcoins, it was actually very hard to find someone; in the whole city of Vienna there were only two people who were doing this. I think right now, it will be way-way more.

Cédric: Now we’ve come a long way since then. Six years later, you could call it bubbles or, at least, like there’s been at least two periods, where people were extremely long or bullish on Bitcoin. I think especially 2017 due to the fact that the prices of Bitcoin and Ethereum rose so much. There’s a lot of public attention, in return the price drove again. It’s been a lot of exchanges. Even though it’s way easier now to get your hands on Bitcoin on buying different currencies, I think it’s still very hard to grasp what these currencies can actually do and what the technology is behind them. So you’ve obviously seen me, joined DFINITY and became excited about the decentralized technology and decentralized applications. But even for me sometimes it’s hard to explain very basic concepts – sometimes I feel like I’m on a very high level talking about concepts or things are changing very rapidly.

Cédric: You’ve decided to take this week off and investigate blockchain, more research and the concepts of blockchain and all the different currencies, and some of their challenges that are associated with some of the principles and concepts out there. Before you did this week, I’m sure you’ve also tried to just more casually pick it up along the way. We’ve talked about this before, you’ve asked me how can I learn about the blockchain and we looked at few different courses and ways of reading and learning about it. What were some of the experiments or ways you’ve researched the technology before? To what degree did it work out vs. failed?

Elena: Well, I started by just asking around anyone that was involved in the crypto and blockchain about how to get started because I thought, maybe someone would have a really good tip and some really good sources. But actually it was very hard to find some valuable information because no one could really tell me where to inform myself and many people would tell me sources and then warned me about many misleading information. But not really tell me how I could distinguish the good and not good sources.

Elena: This was actually quite hard. What I started to do then was just reading through the Wikipedia, which was very good.  However, the information was not very structured, not in the sense that I could grasp the whole topic just by reading Wikipedia, I would get a very fragmented view on blockchain. I felt like many information was missing and I couldn’t connect all the articles together and all the dots together. So this is why I decided to do this crypto week to get more into that and combine all the information.

Cédric: I’ve made a similar observation. I think the Wikipedia is great to drill down into one term or one concept, but to get started on a completely new area of research, it’s sometimes hard, but this is not a linear path. So you start somewhere and then there’s like three branches, and you go in all three and there’s more tangents from all of these leaves. So it can be very a cluttered process or, at least, not very straight forward way of getting from zero knowledge to somewhere close to 100 percent or even 80 percent of certain area.

Elena: It all depends also on who wrote the article on Wikipedia. There are many authors. They have different writing styles – some are easier, some are harder to understand. So I would say these are good sources to look up certain key words or certain elements of the blockchain that you don’t understand. But for grasping the whole topic, it’s actually very, very hard on the Wikipedia.

Cédric: Okay and so I know you’ve done a bit of research before this week when you decided, you wanted to take a bit of time off from your regular job to invest into accumulating more knowledge in this area. How did you go about that and what were the outcomes? What was your learning? How did you structure your process?

Elena: As someone who works in SEO I, of course, started googling around for the best, actually, courses on blockchain because I feel like a course is something more structured and easier for me, actually it is, to learn the topic then just to read certain articles on different topics. So, I found some sources and some nice courses. There are different kinds actually for developers, for people in the financial industry, some general information, etc. There are so many that I really had to look for the best ones. I think I found that.

Cédric: We probably have all gone on Google and we’ve looked for blockchain courses or crypto 101. I know I’ve talked in a previous vlog episode; I’ve talked about my favorite podcast, which was something that helped me to get the key insights. But I’ve never gone through a course that takes you from zero knowledge to a hundred. What’s the course that you’ve chosen to follow? How do you find it? What was your experience so far?

Elena: Actually I found two courses that I really liked on Udemy. There was one that it was only a three-hour course. So there was some general information, like what is a miner, what is a token, what’s protocol, what are coins. This helped me to get an overview. Then, I started another course that was also on Udemy. It’s called Blockchain A to Z and this was actually very nice. It was divided in three different parts – the knowledge part always within these three parts, and there’s a second part, where practical aspects come in, and the practical aspects were coding your own blockchain, your own coins or your own currency and then creating also your own smart contract.

Elena: The first course gave me a good overview, and the second one really gave me some insights on how the technical aspects really are and how everything really works. I felt like this is something not just for developers but really for anyone, who’s interested in the topic. And the second part was then, of course, developing with Python. I’m not that familiar with it and I know some general concepts. But the way it was explained, it was super-super easy for me to actually create my own blockchain. This is amazing because this happened already on the end of my first day of learning about blockchain. So imagine I would go from almost zero or almost nothing to creating my own blockchain in one day. So I would really recommend that course.

Cédric: Well, thank you so much. So I think we’re going to wrap it up here. What I’ve heard so far is a bit about how you first used Bitcoin back in 2012 to actually buy something which is, I think, a lot of people that hold actually Bitcoin have actually never done. They have never exchanged Bitcoin for something in the real world. Then, this week you’ve done a bit of research to find courses to go from zero to as close to a hundred percent in blockchain knowledge as possible. I think the approach you have taken really resonates with me – one high level course, it’s a kind of quick to establish the landscape and a longer course to dive in.

I really like that the course also has a part, where you apply what you learn in theory. I think very often all that theory, especially if we see the math formulas, feel so abstract and complicated but when you get to actually implement the small protocol, blockchain and stuff on top of it, I think, it makes stuff a lot more accessible and easily understandable. Thanks so much. I’m sure we’re going to catch up towards the end of the week. We’ll make sure to capture some of your findings as well and for now have fun with your courses. And we’ll talk soon. Thank you.

DFINITY: A Hack-Proof Platform. Talk with Dominic WILLIAMS, Part 3 of 3
My First Meal After a 14 Day Water-Only Fast 😋

The Seaman Who Works On DFINITY

What Is ‘Proof Of Stake’ And Why Is It Important?