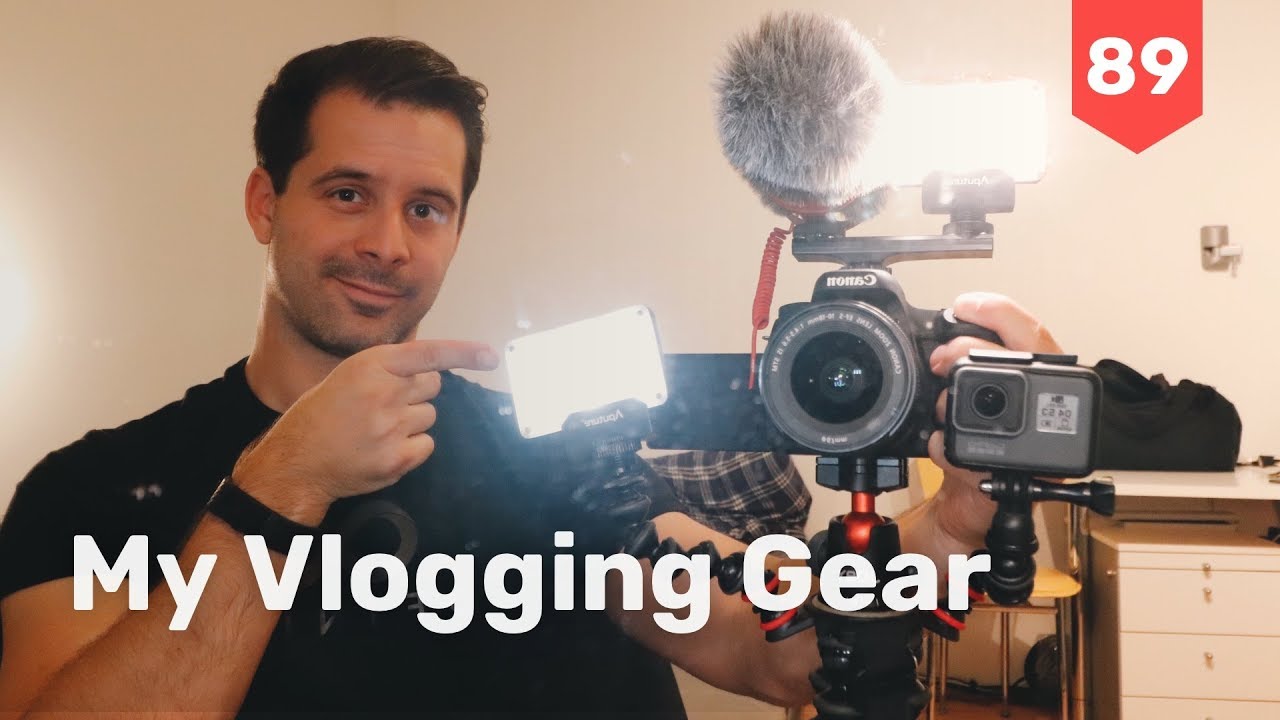 As the vlogging experiment advanced, I’ve updated my hardware. My current kit includes a Canon EOS 77d, a GoPro Hero 5 Black, lights, a mic and a few more things. Check out the video to see my full vlogging gear!

Now that the deadline for this 90-day vlogging project is coming closer, I wanted to give a bit of an overview of what it is that I used to produce these videos.

So today I had a full day of calls at the office. Now I’m on my way to a board meeting with a company that I invested in roughly three years ago. The company’s called Farmy.ch. What Farmy does is it connects consumers directly with producers in the food market. So the farmers directly deliver to the end consumer. Lots of specialty food, lots of great food, fresh food. It typically takes less than 48 hours from when the food is still a plant to when it’s delivered to the customer which is far, far less than if you buy something through a supermarket.

So I just got done with the Farmy board meeting and now I’m headed back to Rapperswil where I have to get a bit more work done. A couple more calls with the West Coast and also take time to talk about this vlogging equipment. Now that the deadline for this 90-day vlogging project is coming closer, I wanted to give a bit of an overview of what it is that I used to produce these videos because I’ve been asked a few times and then maybe also talk about what lies ahead.

Alright, so I am finally back. It’s about 11 p.m. As the vlog experiment is coming closer to its end, or let’s say the first 91 days are coming to a close, one question that I’ve often got was “How do you film this, what’s the equipment you’re using?” And so that’s what I want to focus on today and give you guys some insights. For that, I had to, of course, find a mirror. Here we go!

This is the rig that I’m usually talking to when you guys see me talk to the camera. To go from bottom to top – this is a Joby GorillaPod 5K. It has these extra arms here. On these arms, on one side, I have an MRN AL-M9 light. It’s an LED light, it has 9 levels of brightness. It can actually go pretty bright and I use one that has kind of like sunlight temperature and I use one with a filter on it that I usually use in the dark. Sometimes I use both of them to light both sides of my face.

On the other side, we have a GoPro Hero 5 Black. I opted to get Hero 5 instead of the Hero 6 just because the only difference really is how much you’re paying for it. Whether it does 4k. Slow-mo or not. And as I’m shooting everything in full HD, not 4k anyway, this was the kit to go with for me.

The centerpiece is a Canon EOS 77D camera. I did quite a bit of research. I like the Sony cameras but unfortunately, they do not offer a flip screen. I have a screen where I can actually turn it around and I can see how I’m framing the current shot. So that’s what I typically use when I’m filming myself to make sure that my face is in the picture. And then I’m using it with a Canon 10 to 18-millimeter lens.

Continuing here, this is a Rode Mic Go. It’s a mono mic. I’m using even if a Deadcat just to make sure the sound is good even if there’s a bit of wind. I have a second light up here and then I have a hot shoe splitter so I can have the mic and the extra light fixed on the camera.

The way I count this – I almost got back to 64 items on my list. I have one item here so that’s one, two, three, four, five, six items. That’s the way I count it. And of course, there are various accessories like the SD cards and stuff like that. But in general, it’s six items in total.

In terms of cost, I might not get this one hundred percent right, but just to give you an idea. The lights here are typically, I think, they’re about 45 US dollars. So that’s about 90 US dollars together.

All in all, I did not count and I might completely butcher this but I think it’s somewhere in the range of two thousand dollars – the whole kit. Which currently makes about 20% of the value of all the physical things that I own.

Alright, I hope that clarifies some of the questions that you guys had. We edit the movies in Adobe Premiere Pro and we typically use Google Drive or Dropbox to save the files and exchange them.

That’s it! If you guys have any questions, let me know as always. And with, that I’ll talk to you guys tomorrow.

How To Get Started With Crypto And Blockchain