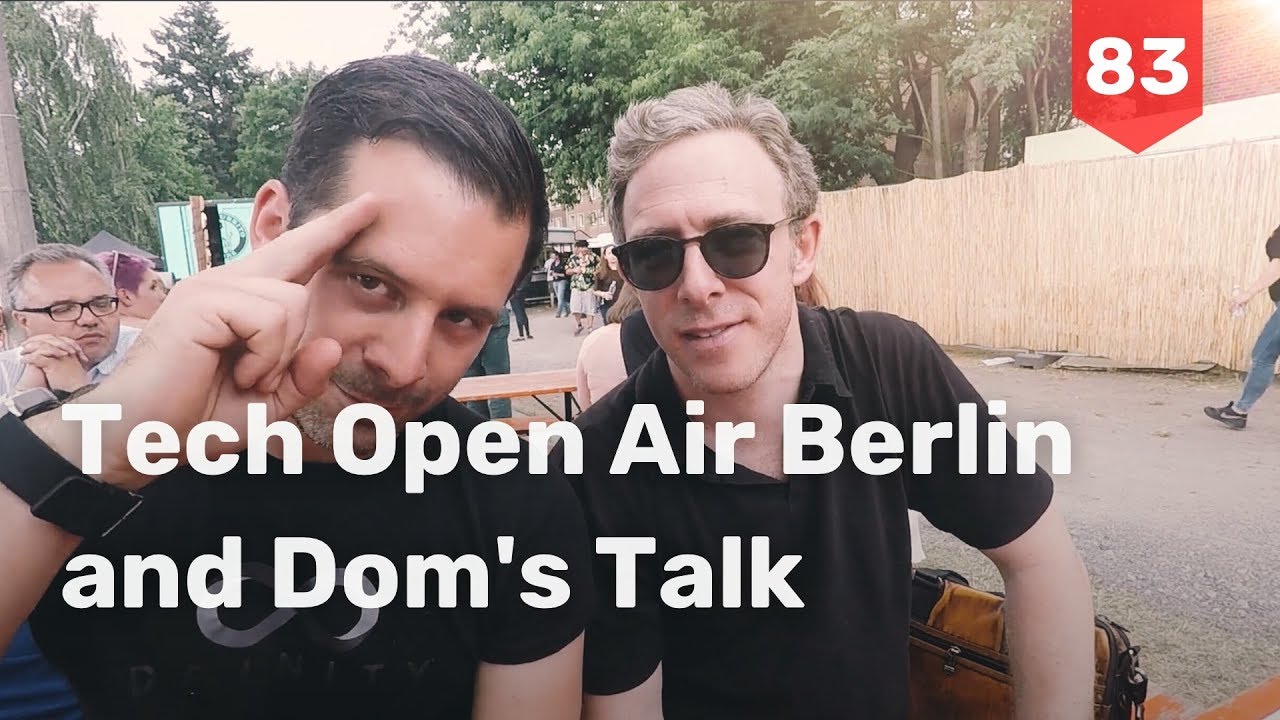 DFINITY presented at Tech Open Air Berlin (TOA). I’ve used the occasion to catch up with Dom and to capture his talk. Dive in for the talk and some additional thoughts on DFINITY!

I’m a lot more awake and I’ve made it to the airport. It’s 6.45 so I have about 2 hours until departure. Plenty of time to go through airport security and work a bit from the airport.

This is one of the few days where I don’t get on a Swiss flight from the airport but I’m headed to Berlin on EasyJet. Three times as cheap as Swiss so it’s hard to justify the extra cost. Let’s see how the flight is gonna be.

Pretty easy flight. About an hour. And now I’m off to my first meeting and then at 3 p.m. is when Dom speaks.

So I just arrived at Tech Open Air Berlin which is a three or four-day tech festival. Festival meaning it’s more of a conference. Now I’m gonna see if I can find Dom and the rest of the DFINITY team.

So seems to be a pretty interesting conference. Cool set up, there’s a number of buildings and quite a bit of an outside area.

I found Dom in here, he’s in a press meeting right now. And then in pretty much an hour from now, he will give his talk here.

Cédric: So, Dom, what’s the number one thing that people get wrong about DFINITY?

Dominic: Honestly, they didn’t so much get it wrong as just not understand it in the first place. And if you don’t understand it, you can’t get it wrong. But I think you know the vague idea that it’s just another blockchain is probably the most common one.

Cédric: We’re gonna run over to your talk at Tech Open Air in a minute. Maybe in one minute, what are you going to talk about?

Dominic: I mean it’s only 20 minutes, right? So I think I’ll probably just try and explain decentralized internet computer and you know… Because I think people are gonna think about it and it’s such an easy way to understand. Like, I’ve used this thing, there we embarrassing shards on it and now they’re gonna be made public. And I guess many Bitcoiners are hacking to get rid of it.

Cédric: Sounds like a fun talk. We’re gonna go right now. And with that, see you guys tomorrow!

My aim today is to try and explain what the internet computer fundamentally is. What’s interesting is that a computer can also be created from a network of computers. And that’s what this thing is here. You can see there are lots of these. These dots represent different computers that are connected together over the internet to produce one larger computer.

For the most part, they’ll be run by people we call miners. Now, in the context of DFINITY and the internet computer, miners are very, very different to Bitcoin or Ethereum miners. So in Bitcoin and Etherium miners just compete to solve these puzzles by brute force which involves expending as much electricity as you can, right. And if you’re the first to solve a puzzle, you get to add a new block to the blockchain and get some kind of reward.

So DFINITY mining is very different. You have to run a computer that looks similar to sort of a mid to high-end server machine. There are different hardware specifications possible.

Miners, when gained scale, they’re running lots of these machines. You know we want the internet computer eventually to comprise, within a ten-year window, fifty to a hundred million machines. The end result is to produce a really massive supercomputer for the internet so that the world can post its sites here.

Why do people run, these, why do miners, these nodes? Well, of course, they earn tokens by doing so.

A key aspect of DFINITY – it scales out its capacity. New mining nodes can join the network to increase capacity so you can install more software on it, run more computations, store more data.

What kind of software will the internet computer run?

We’re looking at you know mass adoption being a thing in the next five years. So that means, if you want to you right now, you can write WebAssembly software that runs at native speed inside of a web browser. That’s not you know something that’s coming tomorrow, that’s… that already exists. This is already there actually.

So if you like, you know, this is about creating an open standard for software that runs anywhere. Already is present on all major web browsers. You can also use that open software to write back-end systems that run on another open system – the internet computer which is a public resource, right. So what we’re trying to do is do for computation what the internet did for networking.

What is the purpose of the internet computer?

How is the network controlled?

We’ve got research centers around the world as a growing organization. We’re growing very, very quickly so we’re trying to build out what we call a NASA of decentralization. So we’re trying to build enough… we believe if you really want the internet computer to host millions of software systems, right, it’s a huge responsibility. So it’s unrealistic to expect it’s you know, 50… 50 research scientist and engineers… This needs to be hundreds of research scientists and engineers behind something that’s so important. And it’s only when you have an organization, sufficiently well-funded and has sufficient credibility and has the kind of expertise on board, you know demonstrable expertise, that we’re ever going to see people really trust a network like this for mass adoption to occur.

My Conversation with Ali Khan