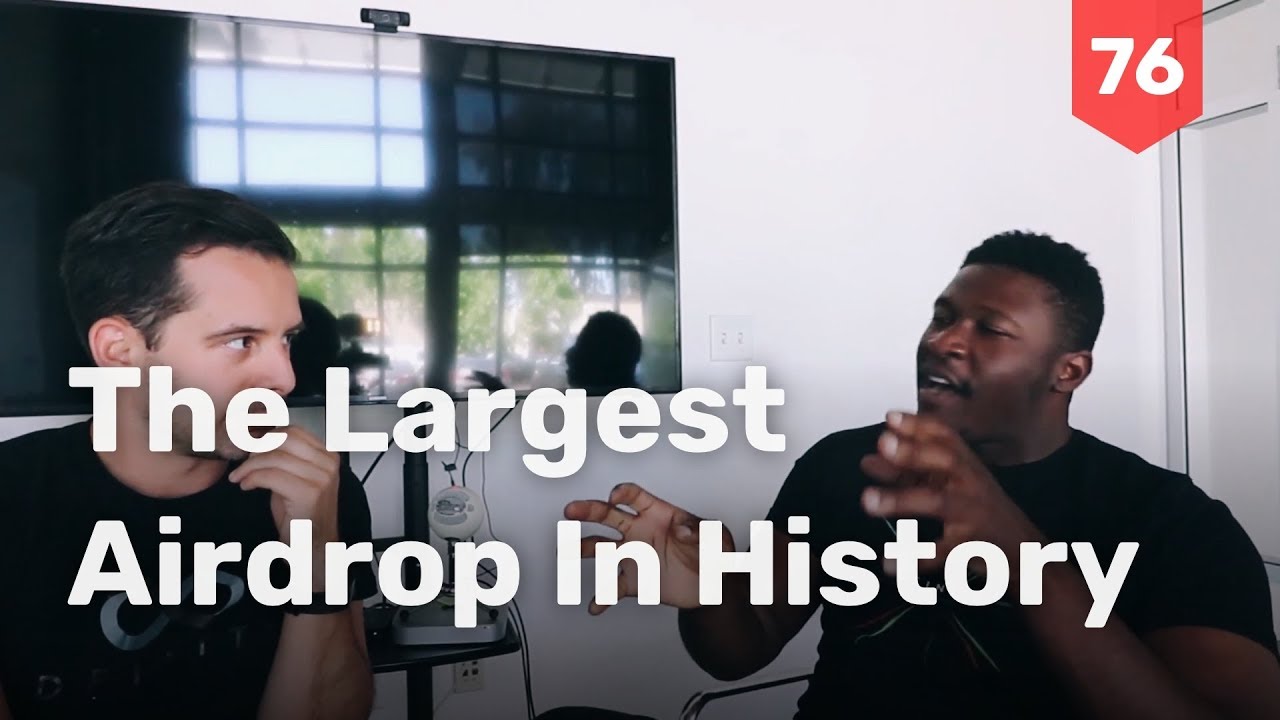 DFINITY just completed a 35M CHF Airdrop. To give you an idea of how massive this number is – it’s twice the size of Ethereum’s ICO! More than 350’000 people participated. In this episode, Mike and I talk about the DFINITY Airdrop and community in general.

So we’re still at the DFINITY office. Another exciting day here in Silicon Valley. And today I sit down with Mike who’s our Head of Community. And we are going to talk about the DFINITY airdrop which just happened.

Cédric: What is your background, what do you do for DFINITY and how did you get excited about decentralization?

Mike: Maybe about two years ago I was doing my own thing – entrepreneur here in San Francisco Bay Area. And I slowly made my way into venture capital and then after that, I spent some time at Facebook working for community operations.

There I worked under the Messenger team. And we had a couple of different projects but specifically working with bots, did some work with FA… And that’s pretty much how I got looted into this community space.

But as far as the blockchain space goes, I’ve just been watching it for you know the past two-three years and I think at… There was a point where I just kind of couldn’t help myself and I wanted to kind of get involved as well. And DFINITY seemed like the perfect place to go.

How big is the DFINITY community?

Cédric: I think we talked about this yesterday – I always get so excited about when I meet people at meetups and just from our community and we talk about the ideas of whatever… what will become possible with all this blockchain infrastructure. That was the moment when I just felt really strongly I need to change everything in my life and focus 100% on blockchain projects.

Cool, so we have a… we’re quite excited about the DFINITY community, right. Are there some numbers that we can share like how many people have joined our community and how many messages are shared and stuff like that?

Mike: Absolutely. So let’s take a look at a couple of the different channels. So and it’s been kinda crazy to see the growth even since I started here at DFINITY. It’s crazy to think that you know I just got started in December of last year. It feels like so much time has passed since then. I mean at this point when I started – Telegram there was maybe 500-700 people in that group. Now at 60,000. Twitter: 30,000. Mailing list: has grown almost exponentially. But we can’t, unfortunately, share that number. Let’s see, Rocket.Chat. Rocket.Chat is probably around 18,000 now with about a hundred thousand messages in total that have been shared on Telegram. I mean on Rocket.Chat.

On building both an online and offline communities

So people are chatting but I think there is still a lot more room for growth there. And more importantly, I think there’s a lot more room for offline engagement too. I think when it comes to my role at DFINITY, I really try to focus on both online and offline community growth. And I think that’s really important if we’re gonna do this right is to be kind of taking a look at both of those directions.

Agree. And I think there’s a strong connection between the two as well, right? For example, we have this chat on Telegram called Mission Control for all the developers. And then the other day I had someone on the video that I met through that community and came by and kind of showed me his project and what he’s excited about in regards to DFINITY.

Cédric: Alright, but the big news that we had to share – less than a couple weeks ago, I think – was the airdrop.

Mike: It came quick, it came like a train! I feel like there is all of this talk about what DFINITY’s token distribution would look like over the past few months. You know, is it going to be a standard ICO, is it going to be accredited investors only? Yeah, it’s just a lot of unknowns with what was gonna happen there. Meanwhile, you know I can say for myself and everyone else here who touches operations and community at DFINITY, you know, for the past few months we’ve just been trying to figure out what our options were and trying to find out the best route. And the airdrop is really what won out.

Cédric: Yeah, because I think you mentioned it earlier like there’s so much that happens in this space that sometimes it feels like it’s dog years, right. Instead of one year, it feels like 7 or 10 years that have happened. And one aspect of that is that also the environment for how you fundraise has changed dramatically in the past two years. When we started we did something that was similar to an ICO or a public raise. And now that’s something that’s kind of unthinkable of just because of all the regulatory checks and balances and problems that have arisen.

What is an airdrop?

Mike: So an airdrop is essentially us taking a portion of the total distribution of tokens that… or the total allocation of tokens that are available and distributing them amongst some segment of people. In our case, we decided that we wanted to distribute pretty much exclusively across our early community members. There are some exceptions, we also invited Coinlist community members to join in on this airdrop as we partnered with them for the KYC and AML portion of this whole thing.

But yeah that was the way that really seemed like it would be the best route. we were pretty well aware of you know how much interest there had been for participating in like a standard ICO or getting involved with maybe larger allocations prior… or larger than what the airdrop maybe would have allowed us to do. So it really seemed like the best option was to kind of reward some of the people who have been hanging out for you know months. And I think we came up with a pretty good solution, all things considered.

Some of the numbers behind the airdrop

Mike: So the airdrop email which is basically us saying you know this is how many people were invited to actually participate in the airdrop was 350,000 participants.

Cédric: So 350,000 emails went out to people? For them to receive free tokens basically?

Mike: Yes, for them to receive free tokens. Now, we don’t have the final numbers of completion just yet. You know there are some things in flux, then you have to wait for people to finish their KYCs and all the payments to get through. So it will be interesting to see kind of what that final number is.

And the other number that you know we can tell about is the 35 million in Swiss francs in tokens that basically be allocated to early community members during this period of time. So I think that that’s really important and I’m really excited that you know myself and the community department – we were able to advocate for getting an additional 10 million Swiss francs in allocation for the community to be for this airdrop.

Cédric: Yeah, it’s just crazy when I think about numbers in this space. Like 35 million Swiss francs is the amount of value that we’re giving away for free basically.

It’s one of those things where you know… now that this process isn’t done and we have still quite some time until the token distribution. But now that this portion of the process is winding down just a little bit, it’s kind of cool you know to maybe just stop and reflect that “yeah, we got to give away 35 million Swiss francs worth of value to people all over the world”. And t-shirts! I mean…

Cédric: I was just gonna ask! Yeah, that’s something we should talk about.

Mike: T-shirts should be shipping soon actually. I think all production is underway, T-shirts to start doing out towards the end of this week into… God knows how long it’s gonna take to get all those t-shirts out.

Cédric: That’s a lot of t-shirts!

Cédric: I’m just really excited about like getting to the moment where I see someone randomly walk on the street with a DFINITY t-shirt, I think that’s gonna be a really cool moment.

Mike: Yeah, you know I feel confident about this. I’m so confident that I actually haven’t seen the numbers just yet. But I really like the pineapple t-shirt and I think for any DFINITY community member I see out there wearing a pineapple t-shirt, I will buy them a beer if I cross their path.

Cédric: Nice! That’s on video now so if you walk past Mike and you have the pineapple t-shirt… and you can come find Mike here in this area so…

Mike: I know, there’s just gonna be pineapple t-shirts all over! But you know what? I think it’s worth it.

Cédric: Yeah, I’m really excited about that too. Just, after seeing everyone in chat and meeting a lot of our members… community members at meetups, I think that’s like the next big step. Like building this global community and getting stuff out there.

How you can take part in the DFINITY community

Mike: Right now, we’re working on making the process easier for anybody who wants to build a project of DFINITY – like videos with a small group of friends or if you want to start a small chapter you know in your area – we’re looking at making that entire process easier. Making sure you get the materials you need from the DFINITY foundation, whether it’s marketing materials, presentation material or different elements for design.

Cédric: So if someone watching this gets excited about DFINITY and maybe starting like a local community or just helping out in a certain area, what would be a good way for them to get started? How do they get in touch with you, how can they reach you, what’s the best way for them to kick this off?

Mike: I would say definitely always feel free to drop by one of the events. On the DFINITY website, dfinity.org, and I think it’s /contact right now. That is the community page, we might change that URL eventually. So you can find a list of all of the social media outlets that we’re on. Always feel free to go there and connect. You’ll find a list that we try to keep pretty up-to-date of all the events that either one of our team members is going to be speaking at or it’s a DFINITY Meetup in of itself.

Those are all listed, feel free to always drop it on one of those. And if you have maybe a project that you’re working on or you kind of just want to chat with you know some of the community team, you can always email community@dfinity.org.

Mike: Yeap, and that’s how you get right to my team.

Cédric: Thanks so much, Mike! Thank you for all the work and energy you put into the airdrop. I think it’s a big step for our project and now we’re all just full speed working towards the network launch.

Mike: Absolutely, I can get a little sleep now!

Cédric: Good stuff! Alright, cool, and with that, I’ll speak to you tomorrow!