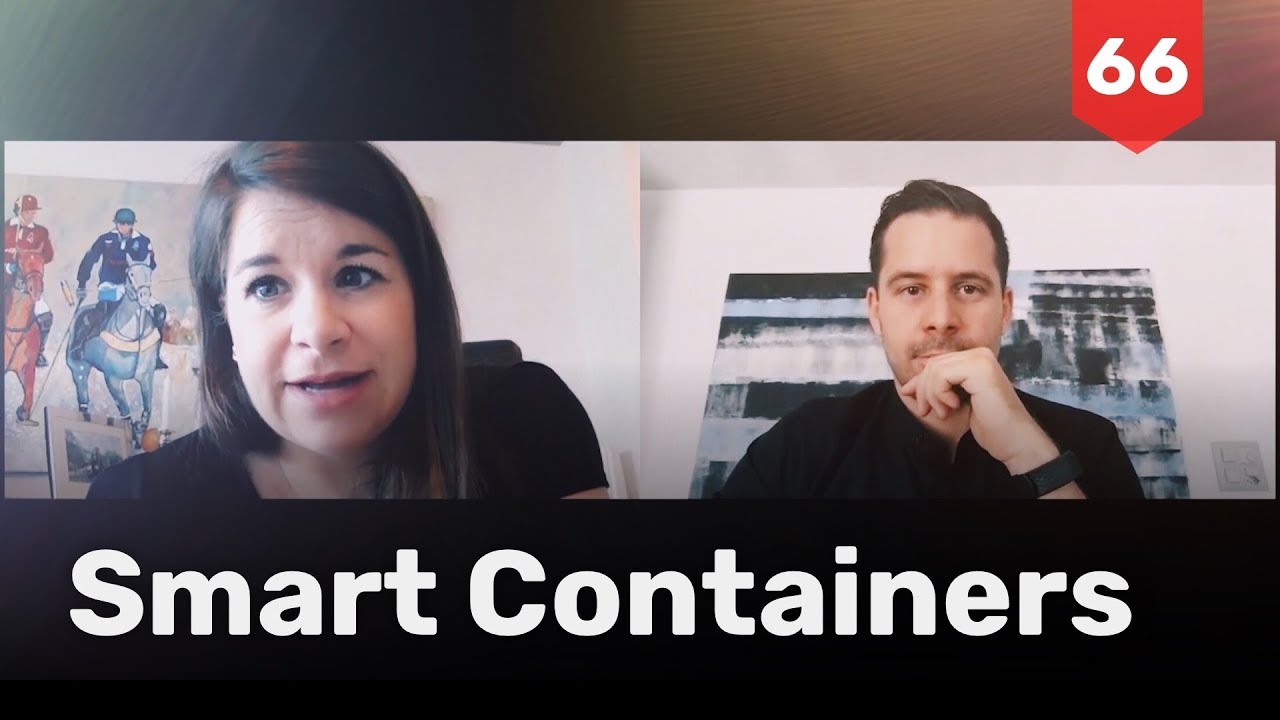 While most projects like DFINITY or Ethereum are still building the infrastructure that will allow truly decentralized applications, other projects are already working on applications. Smart Containers is a successful existing business that specializes in exactly that: Smarter Shipping Containers. In a first step, they’ve built containers that are equipped with various sensors that allow the owner to track where that container is (Carla tells a great anecdote about how that manifested in real life) and various other conditions (like temperature). As a next step, they’ll bring their containers onto the Blockchain. How and why? Check out the video!

The blockchain space is still in its infancy. And one way you can see this is that there are still lots and lots of projects building infrastructure. Examples are Ethereum, Bitcoin is infrastructure and then even more so EOS, DFINITY and similar projects that kind of build the basis, the base layer, for applications to grow on top of them.

But just because we are still building infrastructure does not mean that there aren’t any interesting projects underway that already assume that infrastructure exists and think about what kind of applications they can build on top of that.

In the past, I’ve talked about how education could work on the blockchain or even government systems – whole new nation-states could be set up on top of decentralized architecture. And today I had the opportunity to talk to Carla Bünger who is involved with a project here in Switzerland called Smart Containers.

Smart Containers is an existing successful business. They are the fourth largest logistics company in their niche which is logistics of medicinal products. What’s special about that is they need to be cool, they need to be shipped within a certain time period and so on and so forth. So they have this existing company and they’re already revolutionizing this space by building smarter containers. Because what they do is they pack a bunch of sensors into their containers so that they can track their containers, they can see at which time what temperature was inside the container which adds a lot of data points around their shipment.

From what I’ve learned from her, the shipping industry is a very outdated one and so a lot of people still track shipments on pen and paper. And while they’re building these smarter containers, they’re already ready to revolutionize also the way that data is handled in regards to shipments. And they want to bring their containers onto the blockchain. By the end of the year, they want to have 2,000 containers, they already have 1200 in their fleet right now. And so they have a very ambitious vision and I talked to Carla about their thinking. About why containers should be tracked on a blockchain, how they imagine doing that and all the problems and logistics that come with a logistics business.

My conversation with Carla from Smart Containers

Cédric: Great that we found some time to talk and I’m super curious about Smart Containers. So what I understood is there’s a high overhead and thus a lot of the costs that are related to shipping could be reduced if we just had a more efficient system. How does Smart Containers solve that in a few words?

Carla: We will use an existing infrastructure and we will put all these documents that you need to do shipments on this blockchain so that everyone can access the documents through an open-source reader. So the idea is that instead of having a sequential order of processing documents, everyone can, through the open-source reader, work at the same time, process documents at the same time, upload it again and then the shipment goes also through faster.

They will try to organize this for you. So they will have a truck driver pick the palette up. This truck driver doesn’t necessarily have to be someone from Kuehne + Nagel, he can also subcontract. Well, the truck driver normally will take your pallet and will put it through the airport. Then you have to choose the airline with which you’re flying. And then normally this goes through a hub, maybe Dubai or whatever. From Dubai, you have a ground-handling team taking it out from one plane, putting into another plane. And then the next plane lands somewhere in the middle of China and it needs to go from there to Beijing.

Let’s assume that this pallet needs to be transported in a temperature-controlled way, so in a
chilled container. The problem is also that existing chilled containers are not allowed to leave the airport area. You would have to unload in between and then you also have to pass customs somewhere in between and at some point, it will arrive in Beijing at its destination place. But, you see, there are many, many stakeholders in between in this line and it’s not said that Kuehne + Nagel will do the trucking again in Beijing but they can subcontract because maybe they don’t have facilities there, right? This container needs also to be in a cold warehouse because if it’s standing on the tarmac in Dubai for an hour, it might fail.

What does Smart Containers do?

What Smart Containers does is we have containers where we’re a high-tech container company but we see the potential how to improve the whole software business through the blockchain technology. So what is special about Smart Containers is we have the biggest IOT fleet of containers. There are sensors inside each container that measures temperature and geolocation and humidity and so on. So we know at each moment where the container is positioned globally.

For example, what happened is that the container was standing on the tarmac in Dubai and no one was finding it. And it was in the middle of the Sun, of course, cool chain container – super. And we were calling up the airport in Dubai or, like, the ground-handling team in Dubai and said: “you left the container on the tarmac”. Because with us the alarms were going off because it was heating up. They needed, I think, two more days to find it somewhere on the tarmac, they’ve got it. And then they just had to pull it into a cooling chamber so that it recharged and it was fine again. But this is something we can do. All the others don’t have these sensors inside.

And since we already have the sensors we can put this on a blockchain and we can just enhance the software we are already using with blockchain technology and put this much more efficient way of processing this whole shipment.

How is blockchain gonna help this business do a better job at what it’s doing?

Carla: Exactly like all the other companies in logistics, we spent… we have an Operations team that is, like, let’s say we are a smaller company with 40 people working right now. And from these 40 people, you have six people in operations. I don’t want to say that we’ll get rid of all operations people if we use blockchain – that’s wrong. But, I mean, if we can lower…

The thing is we want to create a fully autonomous container. The idea would be to integrate smart contracts into the container itself. So today what happens is when someone like Ross calls and says “I need a shipment from here to Canada”. Then we do a quote, they accept the quote, then it’s shipped with all the documents and so on. It arrives in Canada and then we do an invoice and then, of course, Ross says “90 days”. And then somewhere you get your money.

Now Canada is quite okay but you get your money… Well, think about Switzerland – so banking transfer fees are not super high. But let’s assume we have a pharma company in India. And so the India company has to pay and then we pay transaction fees from India, like 150 bucks. So the idea would be when our operations team does the quote and the customer accepts the quote, we program this as a smart contract into the container and when it arrives, the client will say through an open-source reader “yes, the shipment is fine, sensors are fine, everything went well and it de-clenches automatically the payment in crypto to us.

So it means not that we will only accept… so the invoice will still be in US dollars or Swiss Francs or Euro or whatever. But we will use crypto and blockchain to make the payment faster and cheaper. That’s actually the thing we want to do. And the container will administrate itself completely, it will know itself where then it has to be repositioned from India to, I don’t know, Shanghai, in order to pick up the next load.

Cédric: My personal opinion right now will be I definitely see the potential to disrupt the industry. I really like the smart containers with the sensors and I thought the story that you told about the people in Dubai not being able to find your container while you were pointing at it… I think this speaks for how much this industry is ready for disruption.

[Video] The Value Of Experiments

How to make Meetings efficient and fun

Why Am I Starting a Vlog?