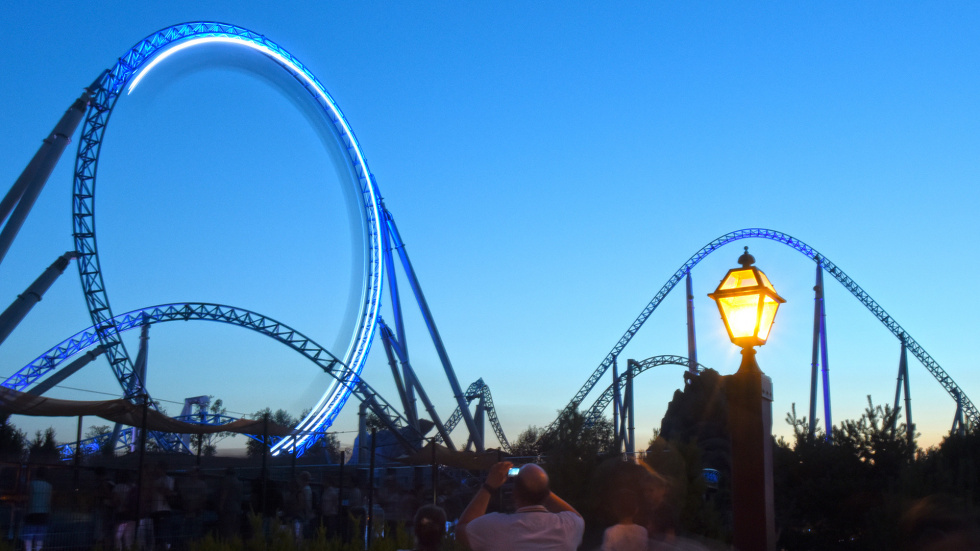 Today’s episode is about our fun trip to the Europa-Park in Southern Germany. One of the attractions of the theme park is the VR roller coaster which we had to check out.

Today we’re headed to Europa-Park which is a theme park in Southern Germany and we’re going to go and pick up Alex and Eric – two twins. We got to know them through friends of ours. They’re 14, first time to Europa-Park and so should be a fun day!

Crossing the border with a Rubik’s Cube in hand

So we’re on the way and the boys have joined us. Just crossing the border from Switzerland to Germany. We have about another hour to go to the park and hopefully, the weather will clear up quite a bit. And I think that’s a good time for the boys to introduce themselves.

Eric: I’m Eric, I really love Rubik’s cubes and different kinds of puzzles like this one which I’m solving. Anything really on computers.

Cédric: So that’s a pretty wide Rubik’s Cube, what’s special about it?

Eric: The edges move in turns and then it can also do these corner turns. In the end, it can get pretty messed up with all these little pieces in there.

Cédric: How long does it take you to solve that?

Eric: An hour maybe. But I’ve already been working on it for quite a while.

We’re just crossing the border to Germany right now. Alright, Alex, what are you smuggling?

Alex: I love any sorts of crafts. So anything I can do with my hands.

Cédric: What is it that you like about building stuff with your hands?

Alex: It feels more realistic when I finish something. Not like on a computer screen. I can actually hold it, touch it, feel it.

Cédric: Do you keep the things?

Alex: Sometimes I give them away, sometimes I sell them.

Cédric: What is some stuff that you like to do on a computer, Eric?

Cédric: We’ll see what we find at Europa-Park.

The VR roller coaster in Europa-Park

Eric: We are going on a VR roller coaster!

Cédric: How does that work?

Eric: It’s a roller coaster and you wear VR goggles.

Cédric: That’s a first for me. Sky explores. Alright, let’s go explore. These seem to have a headset in the front and now we’re going to go on the ride!

A Day With Cédric (Part 1) – The Zurich Startup Ecosystem