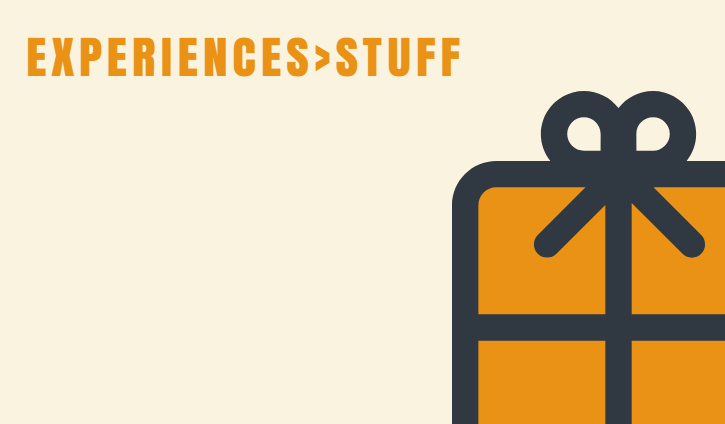 In the last years, I have become very conscious about how much things I own and need. I came to the realization that experiences and spending time together are often a better present than something materialistic. Hence, presence is the best present!

I’ve barely been in Switzerland for eight hours now and it’s time to pack again. Tomorrow morning I am headed to Frankfurt and the reason for that trip is Sunday is Elena’s birthday. But Sunday I’m flying out, I have to be in Toronto. So her best friend and I decided to come up with a little surprise for her. She just knows she needs to get up at 6 a.m. and then I’ll tell her what to pack. We’ll go on a little surprise trip.

Speaking of that, I think birthdays are one of these occasions where you just amass stuff. It’s very common in our culture to gift each other stuff. One sentence that has resonated a lot with me is “presence is the best present”. Meaning just gift time, memories and experiences together instead of things.

Why I think presence is the best present

Experiences can’t break, they cannot be stolen, they don’t go bad and you can carry them wherever you go. So for the past four or five years, especially since I’ve become very conscious about how much stuff I own, I’ve always asked my friends and loved ones if they do want to gift me something, make it something that is connected with time. Spending time with them and not a materialistic thing.

And with that, it’s time to pack my 64 things. I’ve actually updated my t-shirts on this last trip and I’ve also bought new pants so I need to make sure it all fits into one bag.

Alright, perfect. It’s a little cleaner and with that,t I’m down back to one bag. Plus, I’ll just use this for the camera and digital stuff like my laptop.

So we just arrived in Frankfurt after we gave Eli a series of hints. She had to solve riddles to find out where we’re going – which platform we’re departing from and when. We have a few more surprises in store. She’s going to meet another three good friends here.

And it’s escape room time. We had a quick snack and now we’re gonna play this game where we have to break out of a room in 60 minutes or less.

It’s the morning after, I’m back at the airport. We had a really nice day in general. Elena was generally surprised that so many friends took the time to celebrate with her. We did an escape room and we had a very good dinner.

Overall a really nice experience, we had some drinks until midnight and realized that we’re all old farts and went to bed shortly after midnight.

If I want you to take anything away from this video, I think it should be to think about what kind of presents do you want to make. I really like this sentence “presence is the best present”.

And with that, I’ve got to head over to my flight and I’ll see you in the next episode!

Thoughts On Blockchain-Powered Governance
[Video] Why I Travel So Often

Why am I in Japan? | Cédric Waldburger

How To Make Complicated Things Easy?