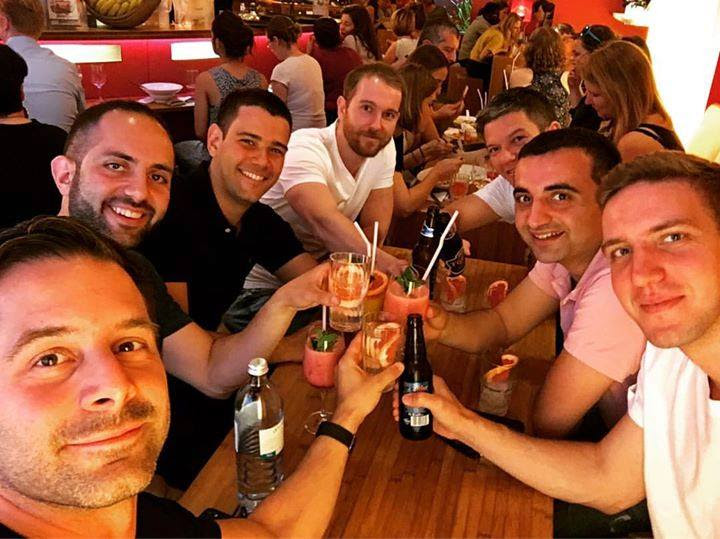 Yesterday I got back from Berlin after another amazing week with the team. While working remotely has many benefits, nothing beats spending time with the team. I was really looking forward to seeing everyone again and especially Armen, our mobile developer, who had only recently joined our team.

Including travel days, we spent seven days together. The two travel days left us only five days to work on long-term concepts, explore Berlin together and, of course, to have fun and create memories.

I’ve detailed the reasons why we’re doing retreats and how we structure our days in another post. This is what the actual days looked like:

After our morning workout and a visit to one of the many good coffee shops in Berlin, we started with collecting our expectations for the retreat. We went in circles and everyone added items to the list until we felt we covered everything. Expectations ranged from «Decide how to collaborate as we grow» and «define the roadmap for next features» to «Create Memories» and «Good Food». We then created categories and assigned all of the items mentioned to their respective category. We ended up with about three work-related categories and a few ‘fun’ categories like “Go to an Escape room”.

The three work-related categories corresponded to the bigger topics we had previously thought about and thus already planned the long term blocks for these.

We started with a block called «Vision Refresher». The goal was to check if we are on the right path, if the vision we captured during the last retreat still fits the one in our head, and to get our new team member up to speed on why we think the vision is right.

We had a couple more sessions as a team and individual work on everyone’s weekly project in the afternoon. We ended the day with a nice dinner at a local restaurant called Katz Orange.

Every morning when we gathered at the office, we started with two things – an icebreaker/ team building exercise and a riddle. On Friday morning the icebreaker that we did was called «Fears in a hat». We slightly changed it to «Fears in a backpack» due to a missing hat. The idea behind this was fairly simple: Write down a fear that you have or had. Everyone submitted this anonymously on a piece of paper and all papers were put into a backpack. Everyone then picked one paper and read the fear out loud. We then talked about how we can relate or can’t relate to that fear and how we share similar fears. We did not identify which fear was originally written down by whom. This exercise led to very interesting discussions and we learned a lot about each other that wouldn’t usually come up at a dinner discussion.

One of our team exercises involved building a tower out of marshmallows and sticks!

We made a lot of progress on the weekly project that day and synchronization within teams. We left to play blacklight mini golf in the early afternoon. Later, as one should on a Friday evening in Berlin, we did a bit of bar hopping and enjoyed the variety of the Berlin nightlife.

We decided to start the morning workout at 9 am instead of 7 am this time. The bar hopping had left some marks on everyone and we were all glad to get a few more hours of sleep.

Saturday was an important day – our long term session was about «User Retention». We realized that we were getting a constant inflow of users by now but we had a hard time at retaining some of them. Our product has a lot of rough edges and we started by writing down what we think «Sucks about Sendtask». We collected all of these, grouped them by the team that could solve them (bugs, for example, were assigned to the tech team while missing documentation was assigned to the content/support team).

Then, we identified the ‘quick wins’ and agreed on a prioritization for the order in which we would attack them.

We had scheduled a call with some of our users later that day to interview them about the product and hear what they like and don’t like. The users we talked to were some of our first heavy users that we did not know personally. They had found us on a website and decided to give the app a try. By now they have added over ten of their team members and are using Sendtask daily. Hearing what value the product brings to their team and how they’ve been able to be more efficient by using it, was great for our spirit. After focusing mostly on what we didn’t do right all day, it was inspiring to hear what we DID do right.

After a quick work session in the morning, we went for brunch to the Bavaria Hofbräuhaus in Berlin. There, we met Fabian and Thomas, two of our investors. They had flown in for two days to meet the team and give presentations on their areas of expertise. We included them in our daily icebreaker exercise and the riddle and after a two-hour brunch, we headed to the office where we started with a round of introductions.

There were only about two hours for breakout sessions where everyone tried to get as much out of their time with Fabian and Thomas. At about 2 pm we left for ‘Picnic’. After the last retreat, everyone mentioned that they loved surprises. So I decided to take them for one.

Thinking we were going for a Picnic, everyone got into a bus and we left Berlin, headed to Brandenburg, the countryside surrounding Berlin. About 30mins in, I told them we were not going for Picnic but instead we’re Skydiving. Some of them were slightly shocked but all of them were excited. About 20 minutes later, we arrived and soon got ready to jump out of an airplane. It was a beautiful, cloud-free day and while the ride up to 4000m was tense, the jump was an unforgettable experience.

Getting ready to jump off an airplane 4000m above sea level

Monday already marked our last day as a group. We made the most out of our morning when Fabian and Thomas gave their presentations. Fabian helped us understand how agencies will use Sendtask and Thomas presented the basics of Web Security.

We thought we did a pretty good job in this area but soon realized that there was room for improvement.

Fabian and Thomas left in the afternoon and we decided to finish our time together with an Escape Room Battle. After finishing very closely one after another (36 seconds!), we went for a dinner and a few drinks together and said goodbye.

In only five days, we got an incredible amount of work done and created a bunch of memories together that we’ll never forget. While it sometimes sucks not to see our team more often, these retreats make it all worth the wait. I’m already looking forward to our next one which will come up in September.

MyEO E≤30 Bali Retreat
What Does Glimpse Do?

Getting Through Long-Haul Flights

Q&A Video: How To Decide Which Startup To Invest In

[Podcast] On Productivity, Routines and Why to Hire a Virtual Assistant